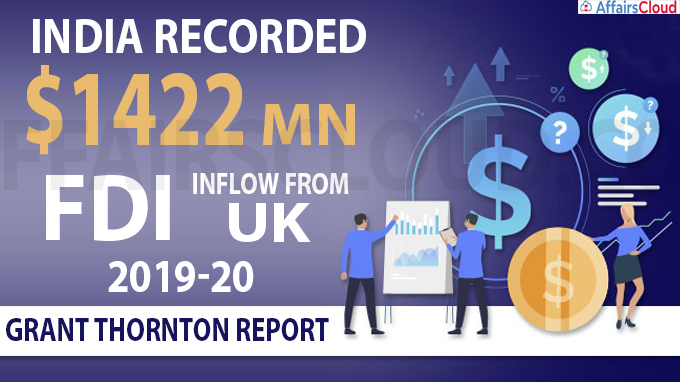 In accordance with the 7th edition of Grant Thornton Bharat’s Britain Meets India report, the Foreign Direct Investment (FDI) inflow from the United Kingdom (UK) to India has increased from $898 million in 2015- 16 to $1,422 million in 2019-20.

Point to be Noted – The UK is currently the sixth largest investor in India, with a cumulative inflow (2000–2020) estimated at USD 29.5 billion, which represents about 6% of the total FDI into India.

–In accordance with the report, there are 572 UK companies in India.

–They have a combined turnover of around Rs 3,390 billion, tax payment of around Rs 173 billion and they have employed 416,121 people directly.

i.On January 13, 2021, India’s Bharat Dynamics Limited (BDL) under the Ministry of Defence and the United Kingdom’s Thales signed a ‘Teaming Agreement’ to develop STARStreak Air Defence system in India under the ‘Make in India’ programme. This partnership will be supported by both Governments.

ii.14th meeting of the India-United Kingdom Joint Working Group (JWC) on Counter-Terrorism 2021 was held virtually on 21st and 22nd January, 2021 where both nations emphasised for strengthening international cooperation to combat the global menace of terrorism. Discussions were held to combat terrorism during the COVID-19 pandemic.