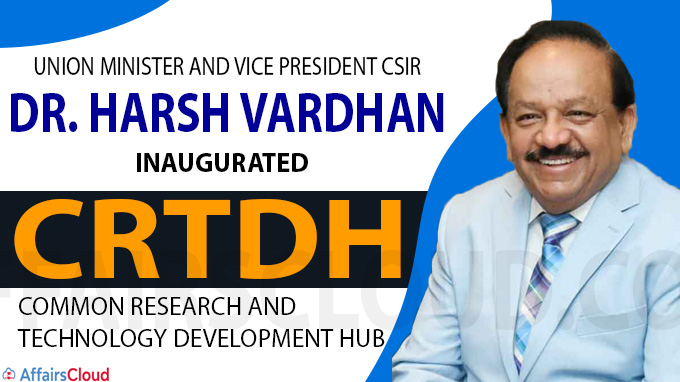 i.During the event, Harsh Vardhan also announced the recipients of CDRI Awards-21 for Excellence in Drug Research & inaugurated a series of lectures named ‘Atal National Colloquium on Healthcare and Innovation’.

CRTDH aims to provide support to hospitals (for clinical trials) & Pharma Industry, MSMEs and Academia for conducting advanced research in the field of Drug discovery.

The recipients of CDRI Awards-2021 were announced during the event. The awards will be conferred on them during CSIR’s Foundation Day on 26th September, 2021.

The awards are given in the categories of Chemical Science, Life Science.

Other Awards announced during the event were

i.During the event, a new technology developed by the research team of Dr Atul Goel for Fluorescent Dyes & Quenchers for development of RT-PCR based diagnostic kits were transferred to Biotech Desk Pvt Ltd, Hyderabad.

i.November 11, 2020, National Academy of Medical Sciences(NAMS) (India) announced that Dr Satish Mishra the Principal Scientist of the Division of Molecular Parasitology and Immunology at CSIR-CDRI, Lucknow has won the “Dr. Tulsi Das Chugh Award 2020” for his research work on the life cycle of Malaria Parasite.