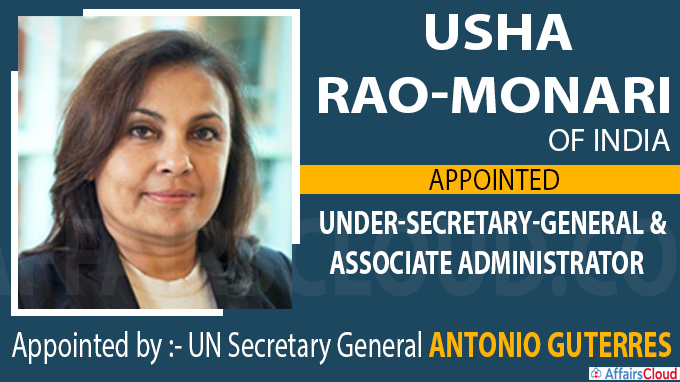 She succeeds Mourad Wahba of Egypt, who served as the acting associate administrator. He also serves as the UNDP Regional Director for Arab States.

The previous Associate Administrator of UNDP was Tegegnework Gettu.

i.She is a senior adviser to  Blackstone’s Infrastructure Group.

ii.Earlier she served as a CEO of Global Water Development Partners, a Blackstone portfolio company.

iii.She also served as the Director of the Sustainable Business Advisory Group at the International Finance Corporation, part of the World Bank Group.

iv.Currently, she serves on the Boards of a number organizations in the field of sustainable development

Soumya Swaminathan–  Chief Scientist at the World Health Organization(WHO); She is a former Director-General of the Indian Council of Medical Research(ICMR)

Anita Bhatia–  Assistant Secretary-General for Resource Management, Sustainability and Partnerships and Deputy Executive Director of the United Nations Entity for Gender Equality and the Empowerment of Women (UN Women).

Jayati Ghosh (65 years), Indian development economist has been appointed by the United Nations to its 2nd term of High-level Advisory Board (HLAB-II) on Economic and Social Affairs.