On December 1, 2017, India was re-elected to Council of the International Maritime Organisation (IMO) under category B. In Council of IMO, Category B represents developing countries and those member countries with the largest interests in international sea borne trade.

Indian High Commissioner to the United Kingdom, Y K Sinha represented India at the election which was conducted at IMO headquarters in London. 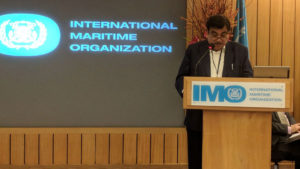 International Maritime Organization (IMO) is a specialised agency of the United Nations, entrusted with the responsibility for regulating shipping across the world.