On April 30, 2020, According to the 7th edition of ‘Open Budget Survey 2019’ conducted by International Budget Partnership (IBP), India has been ranked at 53rd position among 117 nations in terms of budget transparency and accountability with the score of 49 out of 100. While at the same time New Zealand has been topped the list with a score of 87.
The global average transparency score on this survey was 45. 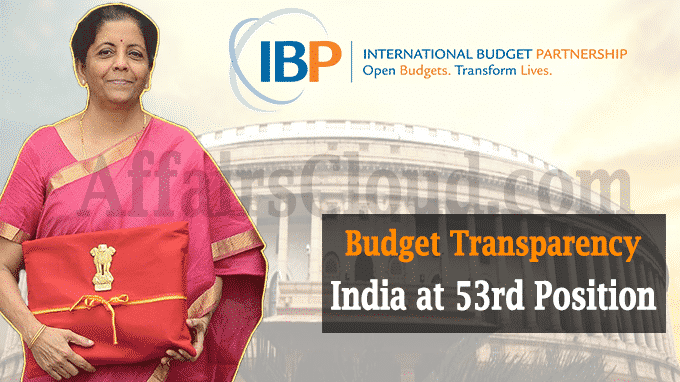 i.Performance of India: As per IBP, the Centre for Budget and Governance Accountability (CBGA) has helped to know the performance of India in this survey, which is just a stagnation over the last few years.India also functioned better in publishing timely and relevant information in the audit reports and in-year reports.

ii.Reason for decline: The survey noted that non-appearance of a published Pre-Budget Statement and not presenting out a Mid-Year Review in 2018-19 decreased the transparency score for the Union Budget of India.

iii.Way forward: The IBP stressed India to provide adequate space for public participation for priority setting in its budgets & effectively use public resources judiciously and accountably, for its improvement.