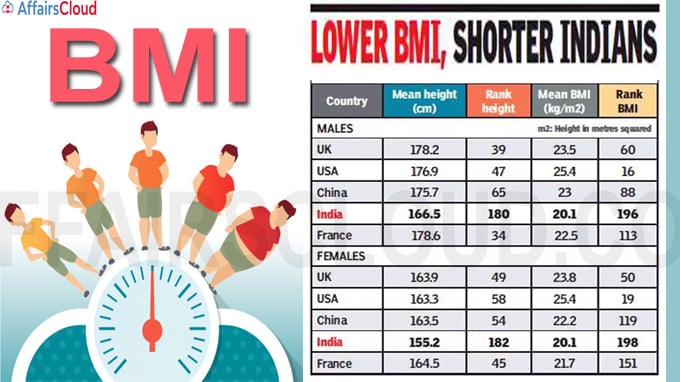 A review of BMI (Body Mass Index) of various countries’ teenagers has been recently published in the international medical journal “The Lancet”, according to which India is placed at 196th rank with respect to BMI in boys & ranks 198th in girls. India’s 19-year-old boys and girls have a BMI of 20.1 means they are also among the shortest in the world.

This review covered school-aged children and adolescents for ages 5-19 years from 1985 to 2019 in 200 countries and territories: a pooled analysis of 2181 population-based studies with 65 million participants

For this pooled analysis, we used a database of cardiometabolic risk factors collated by the Non-Communicable Disease Risk Factor Collaboration. We applied a Bayesian hierarchical model to estimate trends from 1985 to 2019 in mean height and mean BMI in 1-year age groups for ages 5–19 years. The model allowed for non-linear changes over time in mean height and mean BMI and for non-linear changes with age of children and adolescents, including periods of rapid growth during adolescence.

19 year Boys & Girls in India has BMI of 20.1.And India ranked low in BMI.The reason behind this is India had poor nutrition because of low protein and essential micronutrient intake, while urban children hailing from upper socio-economic strata have excess carbohydrates and saturated fats. “The former have low BMI and insufficient height, and latter have better height and BMI and many of them are obese.

In 2019 there is a difference of 20 cm or higher in mean height of 19-year-old adolescents between countries with the tallest populations & those with the shortest populations.

In 2019, the difference between the highest mean BMI  and lowest mean BMI was approximately 9–10 kg/m².

What is BMI (Body Mass Index)?

BMI is a function of height. It is estimated as the weight in kg isolated by the square of the tallness in meters i.e. [ BMI = m/h2].‘m’ indicates mass(i.e.Weight) & ‘h’ indicate height.