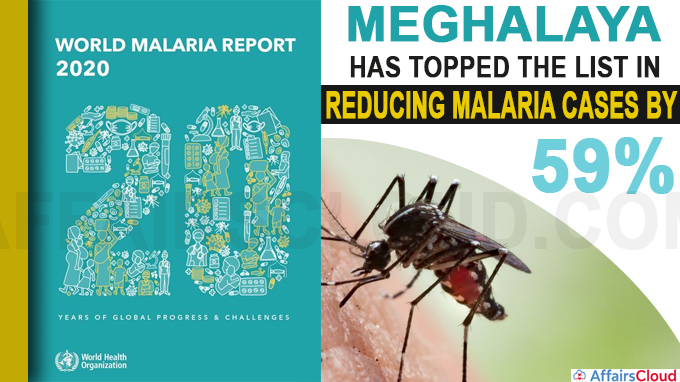 According to the World Malaria Report 2020 released by the World Health Organization (WHO), India became the only high endemic country to report a decline of 17.6 % in 2019 compared to 2018. India reported the largest fall in Malaria cases in the WHO South-East Asia Region, it reported 5.6 Million cases in 2019 compared to 20 Million cases in 2000. Globally 229 Million malaria cases were reported in 2018 in 87 malaria endemic countries.

As per the ‘World Malaria Report 2020’, Meghalaya has topped the list in reducing malaria cases by 59% in India.

List of High Endemic States in India which recorded highest decline of Malaria cases in 2019 (compared to 2018):

Highlights about the Report:

ii.29 Countries accounted for 95% of the Global Malaria cases.

i.The states of Odisha, Chhattisgarh, Jharkhand, Meghalaya and Madhya Pradesh accounted for 45.7% of Malaria and 70.54 % of Falciparum Malaria cases in 2019.

iii.India had accounted for about 86% of all malaria deaths in the WHO South-East Asia Region in 2019.

iv.The Annual Parasitic Incidence (API) (number of confirmed malaria cases per 1,000 population) has been reduced by 18.4% in 2019 compared to 2018, India has been sustaining an API of less than one since 2012.

i.In 2016, the Ministry of Health and Family Welfare launched the National Framework for Malaria Elimination (NFME) in 2016 to eliminate Malaria.

iii.The Provision of Microscopes, rapid diagnostics Long Lasting Insecticidal Nets (LLINs) is one of the major contributors to the big decline of Malaria in India. LLINs are nets which are treated in the factory with an insecticide into the net fabric.

iv.LLINs are being distributed in High Burden areas to reduce Endemicity of high endemic states.

i.The High Burden to High Impact (HBHI) initiative was introduced by WHO in 11 high Malaria burden countries to tackle Malaria.

ii.In India it has been implemented in 4 states – West Bengal, Jharkhand, Chhattisgarh & Madhya Pradesh in July, 2019.

It is caused by Plasmodium Parasite, and is mostly spread by Infected Female Anopheles mosquitoes.

i.25th April 2020 is observed as World Malaria Day to recognise the global efforts made to control malaria and to commemorate the Africa Malaria Day. It is one of the eight official global public health campaigns recognised by the WHO.