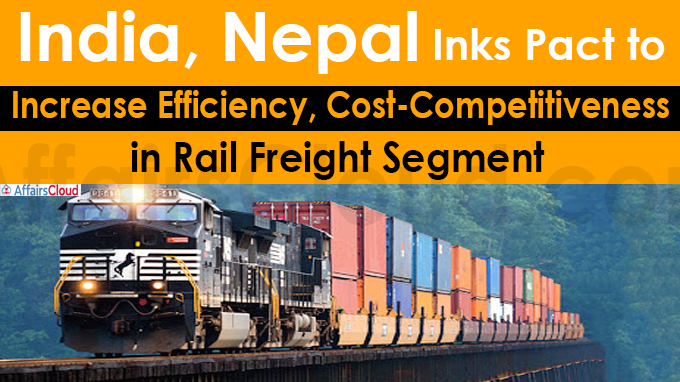 India & Nepal signed a Letter of Exchange (LoE) to revise the 2004 India-Nepal Rail Services Agreement (RSA). The revised agreement will facilitate the import and export of goods through the Indian railway freight services and will come into force from 9th July, 2021.

i.The revised pact permits all types of cargo train operators (public, private, special freight, automobile) authorized by the Indian Railways (IR) to use the Indian Railway Network for carrying Nepal’s container and freight –  both bilateral between India & Nepal or Third country from Indian ports to Nepal.

ii.The Revised pact will benefit the Nepalese traders, transporters and consumers as it will reduce transportation costs for automobiles and certain other products whose carriage takes place in special wagons.

RSA was executed on 21.05.2004 between the Ministry of Railways, Government of India and Ministry of Industry, Commerce & Supplies (now Ministry of Commerce), Nepal for introduction of freight train services between the two countries to/from Birgun (Nepal) via Raxaul (India).