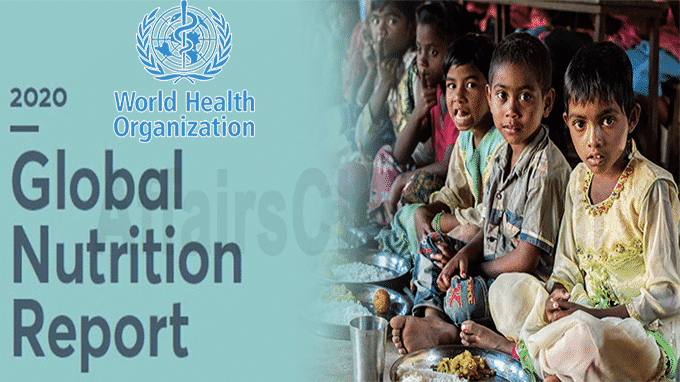 On May 12, 2020 According to World Health Organization(WHO)’s Global Nutrition Report 2020, India is one among 88 countries to miss global nutrition targets by 2025 & is with highest rates of domestic inequalities in malnutrition. India along with Nigeria & Indonesia are worst in disparities in stunting & the levels varied four-fold across communities.

The World Health Assembly in 2012 identified 6 nutrition targets for maternal, infant and young child nutrition to be met by 2025 they are:

Reduce stunting by 40% in children under 5; Reduce Anaemia by 50% in women of reproductive age(15-49 years); Reduce 30% in low birth weight; No increase in childhood overweight; Increase the rate of exclusive breastfeeding in the first 6 months up to at least 50%; Reduce and maintain childhood wasting to less than 5%.

Stunting– It is the impaired growth and development that children experience from poor nutrition, repeated infection, and inadequate psychosocial stimulation.

India in the report

Anaemia– 1 in 2 women of reproductive age is anaemic

i.The rate of overweight and obesity continues to rise, which affects almost a fifth of the adults, at 21.6% of women and 17.8% of men.

ii.Rates of overweight or obesity reach 20.7% in adult women and 18.9% in adult men. There are nearly double as many obese adult females than there are males (5.1% compared to 2.7%).

iii.India faces the double burden of malnutrition with the coexistence of undernutrition and overweight or obesity.

i.The report highlights the link between malnutrition and different forms of inequity such as those based on geographic location, age, gender, ethnicity, education and wealth malnutrition in all its forms.

ii.Inequity is a cause of malnutrition, both under-nutrition and overweight, obesity and other diet-related chronic diseases. Inequities in food and health systems provoke inequalities in nutrition outcomes that in turn can lead to more inequity, perpetuating a vicious cycle.

It was conceived following the 1st Nutrition for Growth Initiative Summit (N4G) in 2013. The 1st publication was published in 2014.

Aim– To inspire governments, civil society and private stakeholders to act to end malnutrition in all its forms.