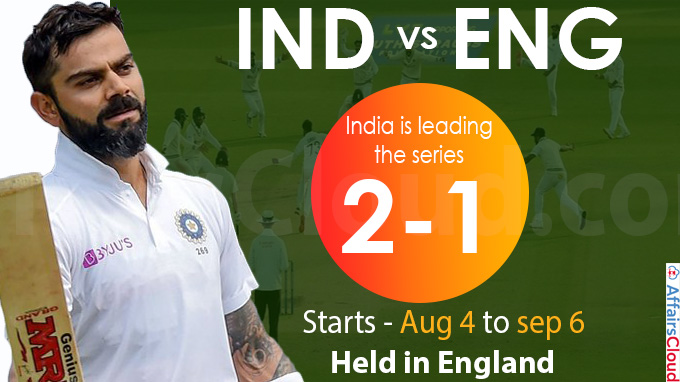 India lead in the 5-match Test Series against England by winning 2 of the 4-matches played and drawing the 1st match, that was held between 4th August and 6th September 2021, in England. The Fifth match of the series was cancelled due to COVID-19 outbreak among 4 of the Indian crew members.

i.At the end of the 4th Test match, the Indian team moved up to the 1st position in the ICC World Test Championship 2021-2023, replacing Pakistan from the top position.

ii.During the Test Series, India was aiming for an historic victory against England. As India won a Test series against England in England only on 3 occasions – 1971, 1986 and 2007.

Both India & England were not in a position to find an outcome for the result of the 5th match, which could lead to a loss of 40 million pounds for England, if results favoured India.

i.The England and Wales Cricket Board (ECB) called for the International Cricket Council (ICC) to resolve the dispute of the 5th match.

During the Test series, Virat Kohli broke the long-standing record of Sachin Tendulkar to become the fastest to score 23,000 international runs in Cricket.

In the September 2021 ranking for Test Batsman, ICC has ranked India’s Rohit Sharma in the 5th spot pushing Virat Kohli to the 6th position. While the England captain Joe Root was placed at the Top spot.

During the Test Series, Indian opening batsman KL Rahul scored a Test century during the Lord’s Test to become the 1st Indian Opener to score a Test hundred in Lord’s in the last 31-years.

Board of Control for Cricket in India (BCCI) has appointed former Indian Captain Mahendra Singh Dhoni as the mentor of India’s 15-member T20 World Cup squad, which is set to play in the ICC T20 World Cup that is set to start on October 17 at UAE and Oman.

i.In March 2021, Ravichandran Ashwin became the 1st Bowler in Test Cricket to take 200 wickets against left-handed batsmen, he is also the 2nd Fastest Bowler (only after Muttiah Muralitharan) to take 400 Test Wickets.

About the Board of Control for Cricket in India (BCCI):