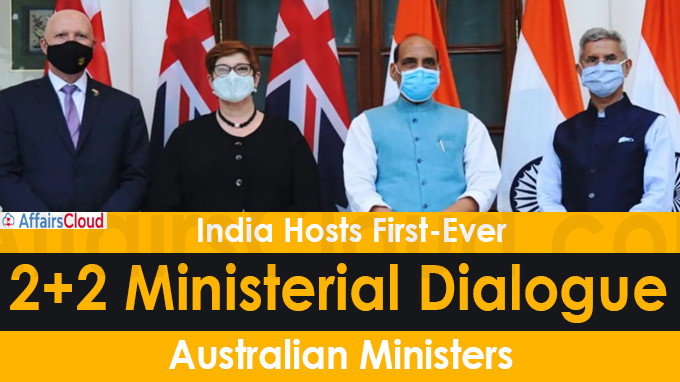 On September 11, 2021, India hosted the 1st ever 2+2 Ministerial Dialogue with Australia in New Delhi. In this regard, Australia’ s Marise Payne, Minister for Foreign Affairs and Minister for Women and Peter Dutton, Minister of Defence Minister visited India.

i.This 2+2 dialogue is the outcome of India-Australia leaders’ virtual summit in June 2020 to elevate bilateral relations to a Comprehensive Strategic Partnership (CSP).

ii.It should be noted that Australia will contribute $10 million to India’s initiative towards disaster-resilient infrastructure as Australia is exploring collaboration with India on low emission technologies in order to ensure a clean energy future.

iii.Both nations are also working towards an ‘early harvest trade deal’  that will act as a base for comprehensive economic cooperation agreement.

iv.Both sides reaffirmed their commitment to quadrilateral cooperation between Australia, India, Japan and the United States (US).

i.Marise Payne laid a wreath at the National War Memorial in New Delhi.

ii.Notably, India has such a framework for talks with a very few nations comprising the US and Japan, and Russia.