India hosted a 2-day (May 13-14, 2019)ministerial meeting of the World Trade Organisation (WTO) in New Delhi in which ministers from 16 developing nations and 6 least developed nations had participated to discuss major problems and challenges facing the multi-lateral trading system.

The Ministerial Meeting had commenced with a dinner hosted by the Union Minister of Commerce & Industry and Civil Aviation, Suresh Prabhu, in which Roberto Azevedo, the Director General of WTO, was also present. 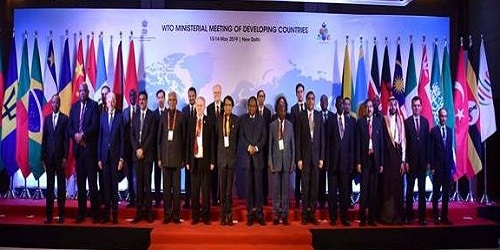 Key Points:
i. Dr. Anup Wadhawan, Commerce Secretary, welcomed the senior dignitaries of the participating delegations from the Developing and Least Developed Countries (LDCs).
ii. During the ministerial meeting, the developing countries and the LDCs were notified to build consensus regarding the WTO reforms, while conserving the credibility of the multilateral trading system embodied in the WTO.
iii. The meeting laid emphasis on ways to constructively and collaboratively engage on issues (both institutional and negotiating) in the WTO, before the 12th Ministerial Conference of the WTO which would be held in Kazakhstan in June 2020.
iv. The participants of this 2-day Ministerial Meeting included:

v. Many unilateral and counter measures have been taken by members and deadlocks have occurred in important arenas of negotiations and appointments in the appellate body.
vi. The deadlocks mentioned above, had a negative impact and led to disrupt the dispute settlement mechanism of the WTO, thus causing demands from different quarters to reform the WTO.
vii. The issues discussed in the 2-day meeting  are as follows:

viii. Previously, on 19th March-20th March 2018, India had organised an Informal WTO Ministerial Gathering in New Delhi, in which more than 50 Members comprising of both developed and developing nations had participated. In that Gathering, the fact that was stressed upon was that there is a strong need to conserve and enhance the credibility of the rules-based Multilateral Trading System as enshrined in the WTO.