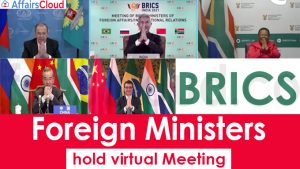 This was the first time the BRICS’ foreign ministers agreed on a stand-alone joint statement on strengthening and reforming the multilateral system especially the United Nations and its principal organs like,

BRICS supported a proposal by India and South Africa to temporarily waive patents on COVID-19 vaccines as it held extensive deliberations on effectively combating the coronavirus crisis.

In October, 2020, India and South Africa, along with 57 members of WTO proposed a waiver from certain provisions of the Trade-Related Aspects of Intellectual Property Rights (TRIPS) agreement for prevention, containment, and treatment of COVID-19.

To combat terrorism in all its forms and manifestations, including the cross-border movement of terrorists and vowed to step up joint efforts in building support for an India-backed Comprehensive Convention on International Terrorism (CCIT).