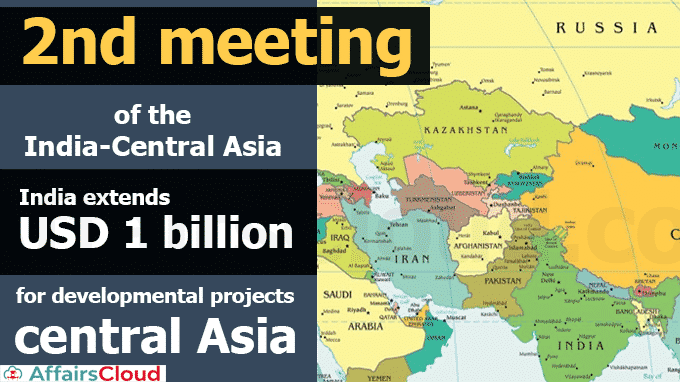 India has extended USD 1 Billion (~ INR  7, 400 Crores) Line of Credit for Development Projects in Central Asian Countries. The announcement was made by India during the Second Meeting of the India-Central Asia Dialogue held virtually on 28th October, 2020.

ii.The Acting Foreign Minister of Afghanistan attended the meeting as a special invitee.

i.India has provided the Line of Credit for priority Developmental Projects in fields such as connectivity, energy, Information Technology (IT), Healthcare, education, Agriculture etc.

iii.The Ministers emphasized on giving new energy to trade and commerce partnerships to overcome the lack of overland connectivity barrier.

iv.During the meeting, an establishment of working groups was made by India Central Asia Business Council Comprising Apex Chambers of participating countries to work on identified priority areas.

v.They emphasized the need for cooperation between Sanitary and Epidemiological Services of India and Central Asian Countries to fight against Pandemic.

vi.The Ministers highlighted the importance of efforts to expand trade and economic cooperation by promoting direct ties between businesses of India and Central Asian Countries.

Foreign Ministers of Central Asian Countries appreciated India’s efforts to modernize Chabahar Port in Iran as it will be an important link in trade and transport communication between Central and South Asia.

i.The inaugural meeting of India-Central Asia Dialogue was jointly organized by India and Uzbekistan on 13th January, 2019 in Samarkand (Uzbekistan).

ii.It was seen as a platform for strengthening cooperation between India and Central Asian Countries.