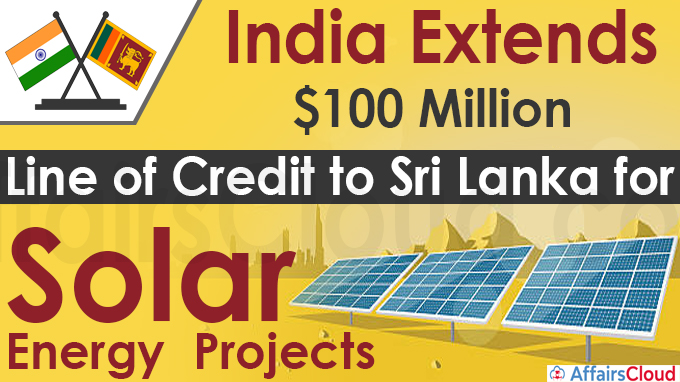 India has signed an agreement to extend a 100 million USD Line of Credit (LOC) to Sri Lanka for projects in the Solar Energy Sector. The agreement was signed between the Government of Sri Lanka and the Export-Import Bank of India.

The agreement was exchanged between Gopal Baglay High Commissioner of India and S.R. Attygalle, Secretary to the Treasury, Government of Sri Lanka and in the presence of Gotabaya Rajapaksa, President of Sri Lanka.

i.The 100 million USD will finance Sri Lanka’s projects in the solar energy sector including the projects announced during the founding conference of the International Solar Alliance(ISA) held in March 2018.

ii.The line of Credit extended by India is for a period of 20 years with an interest of 1.75%.

iii.Sri Lanka has to repay about 960 million USD in debt.

i.The total installed capacity of Sri Lanka is around 4213 MW of which 1400 MW is hydropower and 900 MW is produced from coal power.

ii.According to the Public Utilities Commission, the electricity demand of Sri Lanka is expected to increase at an average of 5.3% from 2015 to 2034.

As per the recent information provided by the Indian Ministry of Science and Technology, the Government of India and Sri Lanka have decided to provide bilateral support with the two countries’ scientists for the joint research on nine projects and 3 workshops in various fields. The decision was taken based on the scientific strength of project coordinators, availability of national priorities, and budget between the two countries.