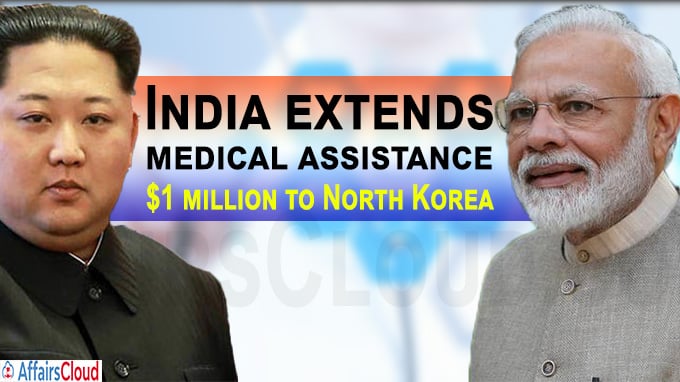 On July 24, 2020, on the request of the World Health Organisation (WHO), the Government of India (GoI) has extended medical assistance in the form of anti-tuberculosis medicines worth about US$ 1 million to Democratic People’s Republic of Korea (DPRK).

The consignment of medicines was handed over by Indian Ambassador to DPRK, Atul Malhari Gotsurve to North Korean Vice Minister for Foreign Affairs, Pak Myong Ho along with a floral basket and a congratulatory letter addressed to the Supreme Leader, Kim Jong Un, on the occasion of the 8th anniversary of conferment of the title of ‘marshal” on him.

-India had earlier provided North Korea two consignments of food worth $ 1 million each in 2011 and 2016 under the World Food Programme (WFP).

-In May 2018, Vijay Kumar Singh, the then Minister of State for External Affairs (MEA), had embarked on a rare visit to North Korea after two decades when Mukhtar Abbas Naqvi visited in September 1998. He was the Minister of State (MoS) for Information and Broadcasting in Prime Minister Late Atal Bihari Vajpayee’s Government.

On May 5, 2020, Russian President Vladimir Putin has awarded North Korean Leader Kim Jong-un a commemorative war medal marking the 75th anniversary of the victory over Nazi Germany for recognizing his role in preserving the memory of Soviet soldiers who died on North Korean territory.