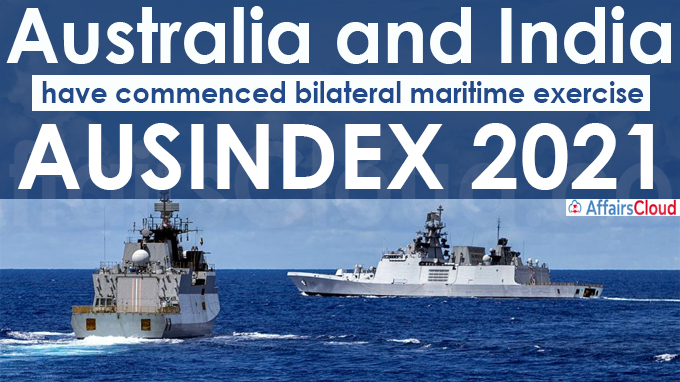 i.HMAS Warramunga, an Anzac Class Frigate, represents the Australian side in the exercise.

iii.Surface exercise will see the participation of HMAS Rankin, Royal Australian Air Force P-8A and F-18A aircraft & integral helicopters of both the Navies.

iv.India & Australia have committed to maintaining peace, security and stability in the Indo-Pacific region as per the “2020 Comprehensive Strategic Partnership”

Note – The Naval Exercise comes ahead of the 1st ever “2+2” Foreign and Defence Ministers meeting that is scheduled to be held between India & Australia in November 2021 at New Delhi.

In August 2021, the United States of America hosted the 25th Edition of “MALABAR”, a joint Naval exercise between the Quad Countries – India, USA, Japan & Australia in the Western Pacific Ocean region.