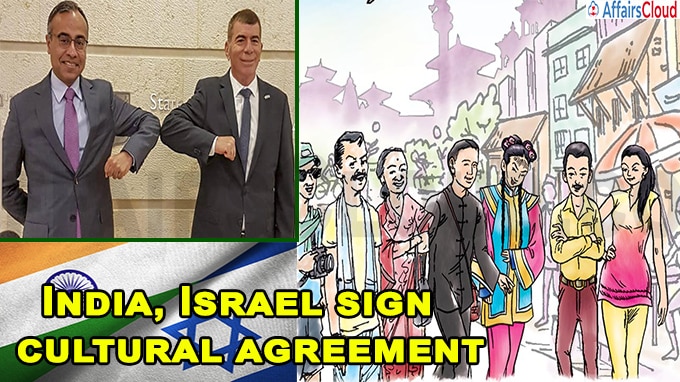 On 20th August 2020 India signed a cultural agreement with Israel, which outlines a three year programme of cooperation for 2020 to 2023, to strengthen the strategic bilateral relations through promoting the people to people exchange.

Gabi Ashkenazi, Foreign Minister of Israel and Sanjeev Singla, India’s Ambassador to Israel signed the agreement at the foreign Ministry in Israel.

Features of the agreement:

i.This cooperation will contribute to the development in the relation between India and Israel.

ii.This will also contribute to raise awareness among youth about the history and culture of the people of both countries.

iii.This will promote cooperation and strengthen the mutual understanding and friendship between the two countries.

iv.This will promote the cultural ties through exchange of heritage and archeology with the support of Israel Antiquities Authority (IIA) and Archaeological Survey of India (ASI)

i.Literary fest and book fairs will be organised under this program to promote the translation of famous works in prose, poetry and other literary works of other languages.

ii.This also includes exchange programmes for students through scholarship, participation of films and filmmakers in the international film festivals and sports related interactions among youths.

Ron Malka, Israel’s Ambassador to India signed an agreement with Uttar Pradesh to cooperate in the water utility on the Indo-Israel Bundelkhand water project.

ii.India and Denmark signed an MOU for developing cooperation in power sector