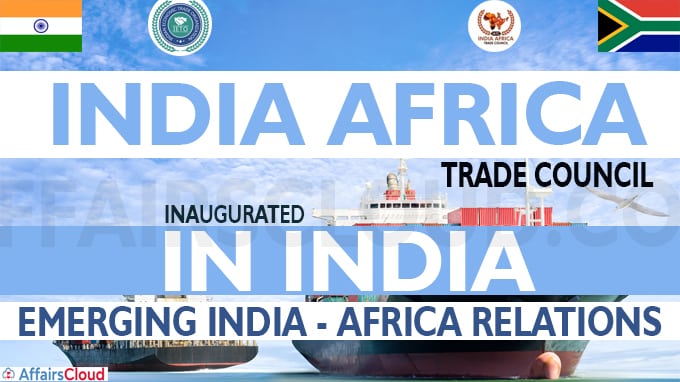 On January 22, 2021, the India Africa Trade Council 2021 was inaugurated in Hotel Crowne Plaza, Chennai (Tamil Nadu) for building up business relations between India and Africa.

–As a part of the council, 13 Trade offices linked directly with embassies in Delhi will be opened in Major Metro cities of India which makes our Indian Businessmen could have the interest to do a trade in African countries.

–The Indian side will facilitate the collaboration of South Indian market which includes Hyderabad, Chennai, Bangalore with African companies.

Ramakrishan, Founder of Corporate Clinic in Chennai was appointed as the Director of the India Africa Trade Council during the ceremony in Chennai.

A 30-member delegation from South India of the India Africa Trade Council will visit COMESA region of Ethiopia, Djibouti, Zimbabwe, Botswana and Namibia in the month of April 2021 and various MOUs in Health sector, Skill development, Agriculture are expected to be signed with various companies and organizations in this region.

–Meetings will be held to discuss the possible collaboration and purchase of 500 cars for Djibouti from India Company Tata Motors.

–Monthly Round Table to be conducted with a focus on different countries of Africa every month in Chennai.

i.On December 13, 2020 Ambrose Mandvulo(M.) Dlamini, Prime Minister (PM) of Eswatini passed away at the age of 52 at South African Hospital. He was the 1st World Leader who died of Covid-19 while serving as Prime Minister.