On September 11,2017, the second Strategic Partnership Council meeting between two nations was held at New Delhi.As a part of the meeting, external affairs minister Sushma Swaraj and her Afghan counterpart Salahuddin Rabbani held talks on wide- ranging topics.The Strategic Partnership Council discussed a range of bilateral, regional and global issues of mutual interest and shared understanding and convergence of views on them. 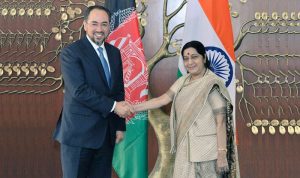 Highlights of the meeting: –

India agreed to extend assistance for the Afghan National Defence and Security Forces to fight againstterrorism, organized crime, trafficking of narcotics and money laundering.The Indian side reiterated its support for an Afghan-led and Afghan-owned peace and reconciliation process.

ii)Trade, Commerce and Investment Cooperation: –
The two sides welcomed the establishment of the Air Cargo Corridor between Kabul and Kandahar with New Delhi in June 2017.Both sides agreed to work towards operationalisation of the Chahbahar Port in Iran under the trilateral Agreement for Establishment of International Transport and Transit Corridor signed in May 2016.
The liberalization of visa measures by India for Afghan nationals, including decision to grant up to 5-year multiple entry business visa, was welcomed as a measure that would promote bilateral trade including direct trade in gemstones, pharmaceuticals, and agri-products. and commerce.
iii)New Development Partnership: –
Both sides agreed to initiate an ambitious and forward looking next generation ‘New Development Partnership’.
Both sides agreed to take up 116 High Impact Community Development Projects to be implemented in 31 provinces of Afghanistan, including in the areas of education, health, agriculture, irrigation, drinking water, renewable energy, flood control, micro-hydropower, sports infrastructure, administrative infrastructure.
iv)Projects with the help of Indian aid

vi)Documents Exchanged
(a) Motor Vehicles Agreement for the Regulation of Passenger, Personal and Cargo Vehicular Traffic;
(b) Memorandum of Understanding between the National Medicine and Healthcare Products Regulatory Authority of Afghanistan, Islamic Republic of Afghanistan and the Central Drugs Standard Control Organisation (CDSCO), Directorate General of Health Services, Ministry of Health and Family Welfare for mutual cooperation in the field of pharmaceutical products regulation;
(c) The Orbit Frequency Coordination Agreement between India and Afghanistan on South Asia Satellite (SAS);
(d) Letters establishing the New Development Partnership and launching 116 High Impact Community Development Projects.
It was agreed to have regular meetings of the Joint Working Groups, including to monitor implementation of the decisions taken. Both sides agreed to hold the 3rd meeting of the Strategic Partnership Council in Kabul on mutually convenient dates in 2018.