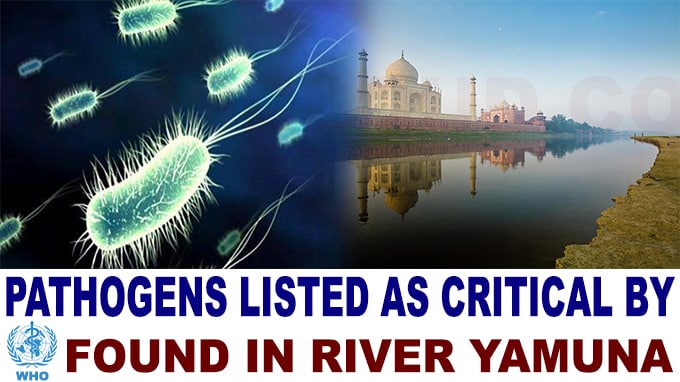 The research team of Indian Institute of Technology, Delhi(IIT-D) found the critical group and multi drug resistant bacteria of the World Health Organization’s(WHO’s) 2017 list of antibiotic resistant priority pathogens, in the waters of River Yamuna.

ii.The gene study on the samples found the presence of Beta-lactamases genes and carbapenemase in the samples.

iii.The possibility of the rapid proliferation of various Antibiotic Resistance Genes(ARGs) among the bacteria through horizontal gene transfer are high and significant correlations between Antibiotic Resistant Bacteria (ARB) and FC as well as ARGs and integron genes were observed.

iv.The drug resistant bacteria poses a greater threat to the river waters and has high possibility to spread the resistance to humans and animals.

i.The ARB and ARG increased in the river due to the discharges from hospitals, industries and households, run-off from agricultural sites and discharges from livestock farming are released into the drains which are discharged directly or indirectly through the Wastewater Treatment Plants(WWTPs) into the river.

ii.The existing WWTPs use the physicochemical treatments to remove the organic pollutants like carbon, nitrogen and phosphorus and are not capable of treating the ARD and ARGs.

i.The first priority pathogen list published by WHO in 2017 is a catalogue of 12 bacteria families that are divided into three categories according to the urgency of need for new antibiotics: critical, high and medium priority.