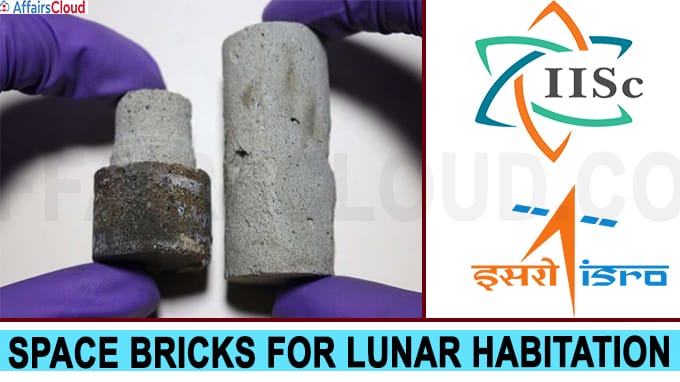 Team of researchers of Indian Institute of Science (IISc) Bengaluru, Karnataka and Indian Space Research Organisation (ISRO) developed a sustainable process for making brick-like structures named “Space Bricks” on the surface of the moon. The process uses the lunar soil, bacteria and guar beans to make the space brick.

The process uses the Urea –  sourced from human urine and lunar soil as the raw materials for the construction on the lunar surface which reduces the overall expenditure.

i.The cost of transporting one pound of construction material from earth to moon takes around Rs.7.5 lakhs.

ii.Since the transportation of bricks from earth is not viable the space bricks are developed.

These bricks can be used to construct the habitation structures on the lunar surface in the future.

i.The bacterias are used to crystallize the bricks in any required shape.

iii.The bacteria uses the urea and calcium to form the crystals as a byproduct of the pathway.

iv.This property of the bacteria utilised by mixing it with a simulant of lunar soil.

i.The gum of the guar beans is used for support replacing cement to reduce the carbon footprint, this can be utilised to make sustainable bricks on earth.

ii.Guar gum serves as a scaffold for carbonate precipitation which increases the strength of the material.

ii.B.velezensis is around ten times less expensive than S.pasteurii, which cost around Rs.50,000 per vial.

iii.The researchers are working towards an automated and parallel production process to make larger bricks.

i.Indian Space Research Organisation (ISRO) has received a patent for its method of manufacturing highland lunar soil simulant or moon soil which was prepared to create an artificial moon surface as a part of 2019’s Moon landing mission Chandrayaan-2.

ii.The Indian Space Research Organisation (ISRO) has initiated a 10,000 crore project- Gaganyaan to send humans to space by 2022, in accordance to which, ISRO has received a patent for its Liquid Cooling and Heating Garment (LCHG) for astronauts to use in space for protection from hot and cold environments.