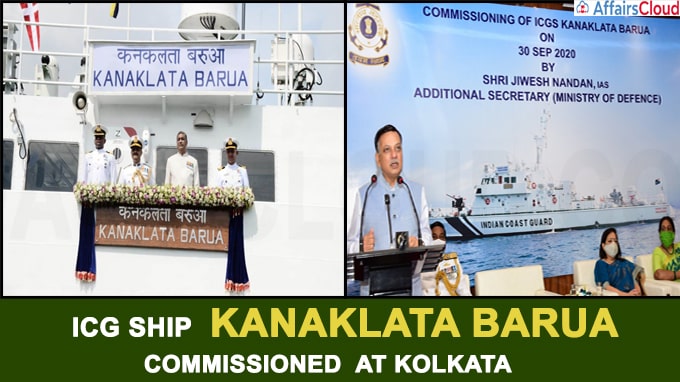 Note– It is to be noted that this is the 2nd time in the record of Indian maritime history that a  Coast Guard ship was commissioned through the digital medium, maintaining the strict protocol of social distance in the wake of the COVID-19 pandemic.

Krishnaswamy(K) Natarajan, Director General(DG) of ICG and Rear Admiral Vipin Kumar(VK) Saxena, IN (Retired), Chairman and Managing Director(CMD) of GRSE among others attended the virtual meeting.

Reason behind the name Kanaklata Barua

The ship was named in the honour of Kanaklata Barua, a martyred freedom fighter who led the procession carrying the Indian national flag during the 1942 Quit India movement.

ii.It is propelled by 3 MTU 4000 series engines designed to reach a maximum speed of 35 knots which displaces about 310 tons.

iv.It replaces a similarly named vessel that was in commission from 1997 to 2018.

v.Upon joining the Coast Guard fleet, the ship will be deployed extensively for Exclusive Economic Zone (EEZ) surveillance, coastal security and other duties as specified in the Coast Guard charter of duties, to protect the nation’s maritime interest.

What are Fast Patrol Vessels?

They are  medium-range surface vessels with a  length of 50 metres, width of 7.5 metres and displacement of around 308 tonnes.

On January 12,2020 The two Indian Coast Guard Ships (ICGS) namely Annie Besant and Amrit Kaur, second and third in the series of five Fast Patrol Vessels (FPVs), were commissioned and deployed along the eastern coast by Defence Secretary Ajay Kumar at Khidderpore park, Kolkata, West Bengal. With a target of becoming a $ 5 trillion economy by 2024, $ 250 billion will be coming from the maritime zone. The Maritime economy constitutes nearly 5% of the world economy.