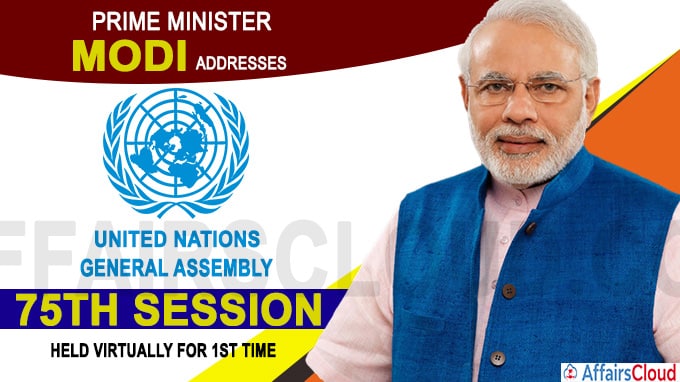 The 75th session of the United Nations General Assembly (UNGA 75) was held virtually for the first time amid COVID -19 from September 15 to September 30, 2020. It was hosted by the United States of America (USA) from New York and under the Presidency of Volkan Bozkir of Turkey.

–India is elected as a non-permanent member for the UN Security Council (UNSC) for a two-year term beginning January 1, 2021. India’s overall objective during its tenure will be the achievement of N.O.R.M.S – a New Orientation for a Reformed Multilateral System.

–India is a founding signatory of the UN Charter.

–India’s vaccine production and delivery capacity will be used to help all humanity in fighting this crisis.

On September 21, 2020 a “Declaration on the Commemoration of the 75th Anniversary of the United Nations” was adopted at the high level meeting for strengthening mechanism to combat terrorism, reformed multilateralism, inclusive development and better preparedness to deal with challenges like the COVID-19 pandemic.

On September 23, 2020, a joint statement issued by US on “Universal Declaration of Human Rights (UDHR)” stating its ‘re-dedication’. This move is endorsed by India along with Bahrain, Brazil, the Democratic Republic of Congo, Egypt, Iraq, Israel, Japan, Jordan, the Maldives, Morocco, Saudi Arabia and the United Arab Emirates (UAE).

Adopted in 1948 by UNGA, it is a “milestone document” in the history of human rights as it was drafted by representatives with different legal and cultural backgrounds from all regions of the world. It acts as a common standard of achievements for all peoples and all nations.

The foreign ministers of the G4 countries (Group of Four) comprising India, Japan, Germany and Brazil hold a virtual meeting during UN75 session. The grouping demanded urgent reform of the UN Security Council (UNSC) while expressing their concern at the lack of any meaningful movement in the Intergovernmental Negotiations (IGN) on Security Council reform.

-India aims to restore 26 million hectares of degraded and deforested land and achieve land-degradation neutrality by 2030.

-India has also set additional targets of eliminating single-use plastic by 2022 and installing 450 GW of renewable energy by 2030.

-The post-2020 global biodiversity framework that will be adopted at the 15th Conference of Parties to the Convention on Biological Diversity (CBD) in 2021 provides a good opportunity to enhance efforts to conserve and protect nature.

-India has organized two Conference of Parties (CoPs) for conserving biodiversity viz. CoP 14 of UNCCD (United Nations Convention to Combat Desertification) during September 2019 in New Delhi, and CoP 13 of the Convention on Migratory Species (CMS) in Gandhinagar, Gujarat during February 2020.

On the sidelines of the UNGA-75 session, on September 25, 2020, a high level Roundtable on Climate Ambition was hosted by the UN Secretary-General Antonio Manuel de Oliveira Guterres during which Bihar Chief Minister Nitish Kumar was the only leader from India to participate.

Bihar has 2% of the world’s population. It is developing its growth strategy around water conservation and greening initiatives under the ‘Jal Jeevan Hariyaali Abhiyaan’. For enhancing its green cover, an additional USD 3.5 billion is allocated from the state budget.

On October 1, 2020, Minister for Women and Child Development Smriti Irani addressed the High-level meeting on the 25th anniversary of the Fourth World Conference on Women – Beijing +25 virtually.

The theme of the event was “Accelerating the realisation of gender equality and the empowerment of all women and girls”.

i.The United Nations (UN) weather Agency, World Meteorological Organization (WMO) in its “Global Annual to Decadal Climate Update for 2020-2024” has forecasted that the annual mean global temperature are already at least 1 C higher now than during the period from 1850-1900 because of man-made greenhouse emissions and there is a 20% chance that it will exceed 1.5 degrees Celsius (2.7 Fahrenheit) in at least one year between 2020-2024.

ii.On 10th July 2020, The United Nations Office on Drugs and Crime (UNODC) released its World Wildlife Crime Report stating that the Seizure of the scales of the Pangolins, the most trafficked wild animal in the world has increased 10 times between the year 2014 and 2018. The report was prepared by the UNODC Crime Research Section.