Hi friends! Our reader Deepankar shared interview experience that he had during IBPS PO V Interview. You can learn from his experience and find a way for yourself as well in the upcoming days. 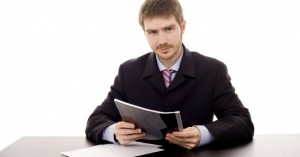 Document Verification & Biometrics: 1:35 P.M (I was 13th). It was my first banking interview and it went like. Entered in interview room @3:30 (approx.)

Me: Thank you sir.

M1: Tell me about yourself. (Academic details, father, his profession, other family members (do not take anyone’s name) and other things, if you have.)

Me: Sir, my name is Deepankar Tripathi. I belong to Lucknow, popularly known as “city of nawaabs”. I have done high school______.

M1: Tell only about graduation.

M1: About other family members?

M2: Which company you worked in?

M1: Immediately after your college, you joined it?

M1: What was the job profile?

Me: Sir, i was working as a Technical writer. Sir, ____ Company is basically related to education field. It provides platform and courses to its customers for certification courses like, OCA, OCP, ComPTiA, CCNA etc.

M1: Then, why you resigned?

Me: Sir, the company has 2 key policies that made me to resign.

Me: Treat your customers like god.(Impressed but it was just a beginning). Sir, when i was working there, i thought I’m settling for less. If i can achieve better and banking industry needs better, so I just wanted to be a part of better and do better.

Me: Sir, the customers I was treating like god, basically were foreign students, foreign universities, and IT professionals. And I was working for them. I wanted to serve the people of our country and banking provides me a better opportunity to enhance the financial literacy of the common people of the nation.

M3: What do you mean? Customers are customers, if they’re foreigners, you’ll not treat them like god.

M2: And Modi ji is saying come in our country and do business and all. I’m not convinced at all. (In Hindi)

Me: Sir, but I’ll choose to work for the people of our nation, first. (In Hindi)

M3: I’m not convinced. What are you saying?

F1: The company policies are really good and I don’t find this reason for your resignation. You shouldn’t resign from there.

M1: (Looking at my application form) You resigned and directly came for preparation of banking. What was your salary, there?

M1: (Looking at my Application form) You’ve put EXIM, ECGC at top, there you’ll have to treat foreign customers, right?

Me: Sir, In EXIM and ECGC I’ll get more salary.

Me: Sir, in comparison to other banks. They are statutory bodies of GOI. More growth, 5 working days, Less public responsibility.

M1: Your concepts are not clear, you’re contradicting everything. You resigned from your last job coz you’d to treat foreign customers and now you’re saying this. Customers are customers and that’s what matters. It doesn’t matter they are Indians or foreigners.

Me: (I was already completely dead, meanwhile.)

M2: Enough of this. Let’s talk something about GK. You said, Lucknow is the “city of nawaabs”? Ok, agreed. Would you please tell me the names of all the nawaabs since beginning to the end, serially? (In Hindi)

Me: Sir, the last one was Begam Hazrat Mahal and the rest i don’t remember. (In Hindi)

Me: Sir, she was the last emperor of “awadh”.

M1: What is emperor?

Me: Sir, who has an empire.

M2: She was a lady and she was nawaab. She was begam of a nawaab and all other things. There’s a long history about it. (He smiled)

Me: (I was no more. May my solitary soul rest in peace.)

M4: You’ll have heard that dollar’s value is increasing in comparison to rupees. Suppose 1 $=10 Rs. and all. What will be the effect?

Me: Sir, the oil prices are falling and India has to export it and dollar is a global currency, a SDR. These transactions are done in dollars.

M4: That’s what I wanted to listen.

M2: Tell me the exact figures of Indian foreign exchange.

Me: Sir it has recently decreased.

M2: I’m not asking this. Tell me the figures.

M1: What else exams you’ve given?

Me: Sir, i was out in RRB PO in mains due to few marks and now I’m looking for PO.

M1: What about clerk?

Me: Yes sir, I’ve given it but currently I’m looking for PO.

Me: Sir, if I’ve the opportunity to be a PO then i won’t waste a seat in clerk.

M2: There’s no interview in Clerk. Now what are your chances?

Me: Sir, in that case, the cut-off of U.P. will be higher and i won’t get in due to less no of attempts.

Conclusion: I don’t know what they were trying to find out in me. Maybe they were checking my break down point or how I react in these tough conversations. And for that thing they pushed me down since the very beginning and keep pressurizing me on whatever I said. They were playing with my mind, very well. And, it was my 1st interview so the tension was reflecting from my face (maybe). Maybe they were expecting a negative reason of my job resignation but I was confident at that moment. But when it came to “nawaabs” and all, due to overthinking and regretting, “why I said this line in the beginning?”, I broke down and they got the reason to push me down. But the beginning was good and the last was too. Now, let’s see what happens. But it was disastrous, and I’m the one responsible for it. The things would’ve been better if in some cases, I would’ve replied, “Sorry sir, I don’t know”. But I keep uttering anything like hell. But it was ok, at least I’ve got a big lesson for future.

Thank You Deepankar for sharing your Interview Experience with us.