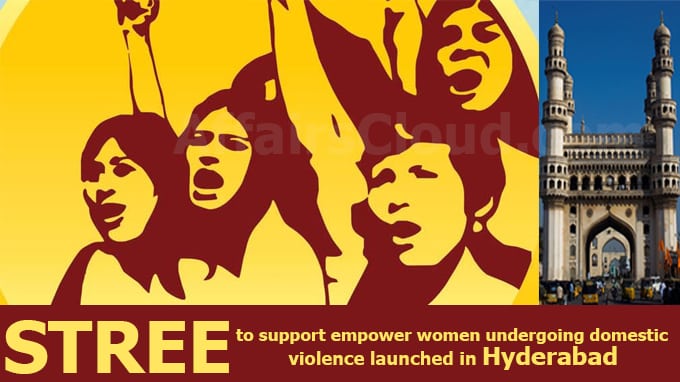 Hyderabad City Security Council(HCSC) along with Hyderabad City Police launched “She Triumphs through Respect, Equality, and Empowerment(STREE)”, a programme to support and empower women victims of domestic violence and abuse.

Objective of the programme:

i.To promote a common platform for all women to join together and work with police to deal with issues related to women’s safety and security

ii.To raise awareness among the women on their rights, entitlements, laws and support systems & also to build a network of partners to ensure women’s safety, equality and empowerment.

Gist about the programme:

i.The local police will engage women from different sections of the society & will set up a STREE group at the police station as part of the programme

ii.A proactive woman will be selected as a volunteer from each group to form as SABALA Shakti.

iii.The members of the group consist of representatives from Non-Governmental Organizations(NGOs) or from the Department of Women and Child Development, an advocate and the local Station House Officer (SHO).

The idea for the programme for women’s empowerment was emerged by recognizing the International Women’s Day theme 2020, ‘Each for Equal’ to emphasise sustainable and impactful change by involving women in the community.