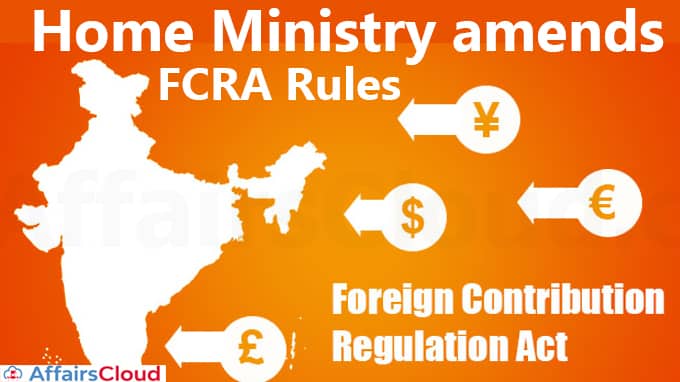 On November 11, 2020, the Ministry of Home Affairs (MHA) amended the Foreign Contribution Regulation Act (FCRA) Rules, 2011 by notifying new rules under the Foreign Contribution Regulation Act (FCRA), 2010. Under clause (b) of sub-section (4) of section 12 of the Act, The NGOs (Non-Government Organizations) that intend to receive foreign funding must have existed for at least three years and spent Rs 15 lakh in voluntary activities to be eligible to receive money from abroad.

i.The new rule said, The organisations specified under clauses (v) and (vi) of sub-rule (1) shall be considered to be of political nature, if they participate in active politics or party politics, as the case may be.

ii. Aadhaar Number for Office bearers of the NGOs was made mandatory, office expenses were brought down to 20 percent of such amount and election candidates, government servants, members of any legislature and political parties were prohibited from accepting foreign funding.

The Ministry of Home Affairs (MHA) has relaxed norms for farmer, student, religious and other groups who are not directly aligned to any political party to receive foreign funds if the groups are not involved in “active politics”.

In case of foreign donor:

–FCRA regulates foreign donations and ensures that such contributions do not adversely affect the internal security of the country.

i.The MHA has redefined guidelines on how non-governmental organisations (NGOs) can accept, transfer and utilise foreign donations and contributions by amending the provisions of the ForeignContribution Regulation Act, 2010 (FCRA) with Foreign Contribution (Regulation) Amendment Act, 2020 which has come into force w.e.f. September 29, 2020.

ii.On August 17, 2020, Ministry of Home Affairs (MHA) approved the renaming of Manduadih Railway Station in UttarPradesh (UP) as ‘Banaras’.

About Ministry of Home Affairs (MHA):