Aim: The aim of the exercise is to improve preparedness during disaster situation and to recognize procedures coordinating post-earthquake responses with participation of all the 8 SCO member countries. 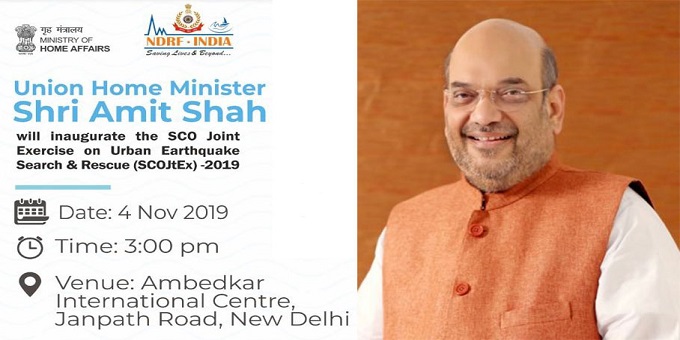 Key Points:
i.Events: The exercise will be conducted as per International Search & Rescue Advisory Group (INSARAG) methodology & guidelines. During the exercise, SCO member states will undergo rescue exercises, panel meeting for disaster prevention, which will be followed by 10th Meeting of Heads of Departments of Disaster Prevention of SCO member States.

ii.During the inaugural event, HEALTH mantra given by Modi to the SCO members for cooperation in 6 sectors were discussed. They were H’ for healthcare cooperation, ‘E’ for economic cooperation, ‘A’ for alternate energy, ‘L’ for literature and culture, ‘T’ for terrorism-free society and ‘H’ for humanitarian cooperation.

iii.Minister of State(MoS) for Home Affairs, Shri Nityanand Rai will be the chief guest for the closing ceremony on 07th November, 2019.

India’s disaster management plan:
i.In India National Disaster Management Plan was launched in 2016, which covered almost all states and Union Territories(UT). India, reduced loss of live to less than 1% in terms of disasters in over a decade.

ii.India launched the South Asia geostationary communication satellite for weather and communication improvement. The ‘Owner Driven Reconstruction for Housing’ plan implemented in Gujarat after the earthquake in the state in 2001 was then later implemented in other countries.