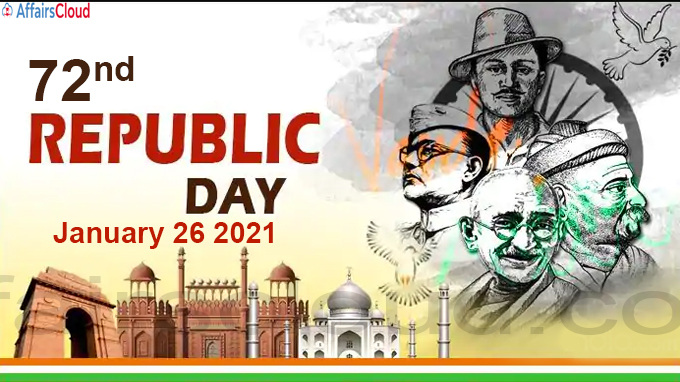 On January 26, 2021 India celebrated its 72nd Republic Day. On this date, in 1950 the Constitution of India came into effect by replacing the Government of India Act (1935).

During Republic Day Celebrations of each year,

President of India, who is the First Citizen of the Country unfurls the National Flag at the event.

The Republic day celebrations are held at Rajpath in Delhi. Some of the major events are

This is the 1st time in 55 years that the Republic Day Celebrations took place without a Chief Guest.

A Total of 32 Tableaux participated in the 2021 Republic Day Celebrations – 17 states & UTs, 9 from Central Ministries & 6 from Defence Arm.

Participation of Bangladesh tri-services for the 1st time:

For the 1st time, a 122-member Bangladeshi Triservice force Contingent participated in the Republic Day Parade.

Each year, Officers of Central Board of Indirect Taxes & Customs (CBIC) are considered for grant of Presidential Award of Appreciation Certificates & Medals for

i.For 2021 Awards, 2 officers from CBIC were selected for Exceptionally Meritorious Service & 22 officers under the Specially Distinguished Record of Service.

ii.The two officers selected for the Exceptionally Meritorious Service  rendered at the Risk of Life are

President Ram Nath Kovind approved the conferring of Jeevan Raksha Padak Series of Awards – 2020 on 40 persons. It is awarded to a person for honouring the meritorious act of human nature in saving the life of a person.