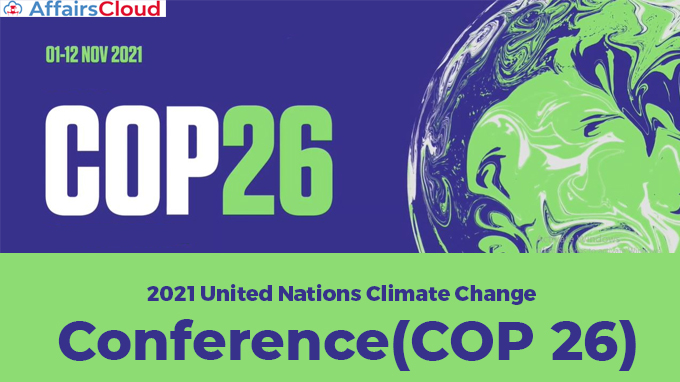 The 26th Conference of Parties (COP26) of the United Nations Framework Convention on Climate Change (UNFCCC) is being held in Glasgow, Scotland, United Kingdom (UK) from 31st October – 12 November 2021.

i.At the summit, the PM has set 5 ambitious targets for India to combat climate change. It includes that India will aim to attain net-zero emissions by 2070.

ii.The PM asserted that India is the only country that is delivering on the commitments on tackling climate change under the Paris Agreement.

iii.In order to support vulnerable island nations that are in the danger of submerging because of rising sea levels, the PM urged the rich countries to provide $ 1 trillion in climate finance to the developing world to achieve its climate change mitigation targets.

ii.The new programme for the small island states is part of the Coalition for Disaster Resilient Infrastructure (CDRI), an Indian initiative announced by Modi at the UN General Assembly in 2019.

iii.So far, 25 other countries, including Germany, Italy, Japan, Australia, and the United States have joined the CDRI coalition.

iv.CDRI is the 2nd international collaboration set up by India in the climate change sphere, the other being the International Solar Alliance that has now evolved to the status of a treaty-based intergovernmental organisation.

PM Modi and his British counterpart Boris Johnson jointly launched the world’s 1st ‘green Grids’ Initiative, the One Sun One World One Grid (GGI-OSOWOG) on the sidelines of the COP26 summit.

i.Under the initiative, the Indian Space Research Organisation (ISRO) has made available a solar calculator to inform countries about the solar potential of any place on the earth using satellite data.

iii.The project was spearheaded by India and the UK in partnership with the ISA and the World Bank Group and aims to harness solar energy wherever the sun is shining.

iv.The declaration has been endorsed by 80 ISA member countries. The ISA’s recent analysis calls for a tripling in investment in grid expansion and modernisation from $260 billion to $800 billion annually by 2030.

v.ISA aims to mobilize US$1 trillion of funding by 2030 to assist developing countries in expanding their solar power grids to meet their energy needs.

vi.The global grid concept was 1st announced by the PM in October 2018 during the1st assembly of the ISA, in May 2021, the UK pledged technical, financial and research support for the OSOWOG project.

-India signs up to UK’s Breakthrough Agenda on affordable, cleantech

The UK government has launched a breakthrough Agenda, an international plan to deliver clean and affordable technology everywhere by 2030 at COP26.

i.Power: Clean power is the most affordable and reliable option for all countries to meet their power needs efficiently by 2030.

ii.Road Transport: Zero-emission vehicles are the new normal and accessible, affordable, and sustainable in all regions by 2030.

v.Agriculture: Climate-resilient, sustainable agriculture is the most attractive and widely adopted option for farmers everywhere by 2030.

After India’s five-point climate agenda, a Global methane pledge was launched to make a 30 percent reduction in global methane emissions from 2020 levels by 2030. The pledge is jointly led by the United States and the European Union. So far, over 90 countries have signed the pledge.

i.It is a dangerous greenhouse gas, with a global warming potential which is more than 80 times that of carbon dioxide, even though it remains in the atmosphere for significantly less time as compared to carbon dioxide.

ii.Methane accounts for about 17 percent of global greenhouse gas emissions and 25 percent of the warming that the world is experiencing.

iii.As per the Intergovernmental Panel on Climate Change report, methane accounts for about half of the 1.0 degrees Celsius net rise in global average temperature (since the pre-industrial era).

iv.Methane is the 2nd non-CO2 greenhouse gas that has been targeted for reduction. In 2016, the world had agreed to cut down the use of hydrofluorocarbons (HFCs) which are used extensively in the air-conditioning, refrigeration and furniture industries.

i.The pledge to stop and reverse deforestation by 2030 (not a formal agreement) was also made in the same manner. Over 100 countries including the U.S., China and Brazil have signed on to it.

ii.The agreement includes countries accounting for 85 percent of the world’s forest land. They have committed around $20 billion of public and private funds to protect and restore forests.

iii.The agreement is also a step forward from a similar pledge to save global forests made in 2014 at a summit in New York.

iv.India has not signed up to both the two pledges. China and Russia also have not signed the agreement over methane reduction.

i.4 partners have collectively pledged $665 million toward a Green Recovery Platform managed by the Asian Development Bank (ADB) to mobilize an additional $7 billion for low-carbon and climate-resilient infrastructure projects in Southeast Asia.

ii.The partnerships will be part of a new Green Recovery Platform to support the Association of Southeast Asian Nations (ASEAN) Catalytic Green Finance Facility (ACGF), which was established by the ASEAN Infrastructure Fund and is managed by ADB.

iv.The platform has targeted a total of USD 7 billion for such spending. So far, including earlier pledges, it has raised USD 2 billion.

-Environment Minister insisted the Climate finance be at USD 1trillion

i.Union Environment, Forest and Climate Change Minister, Bhupender Yadav insisted on the increase in climate finance at the Ministerial meeting of the Like-Minded Developing Countries (LMDC) held on the sidelines of COP 26 in Glasgow.

ii.Bhupender Yadav urged climate finance to be at least USD 1 trillion (not to continue at the levels decided in 2009) to meet the goals of addressing climate change.

PM’s Meet: PM Modi had a meeting with the PM of Nepal (Sher Bahadur Deuba) and Israel (Naftali Bennett) on the sidelines of COP26 in Glasgow, UK.

On October 18-21, 2021, the 4th General Assembly of the International Solar Alliance (ISA) held virtually which was inaugurated and presided over by Union Minister Raj Kumar Singh, Ministry of Power and the President of the ISA Assembly.