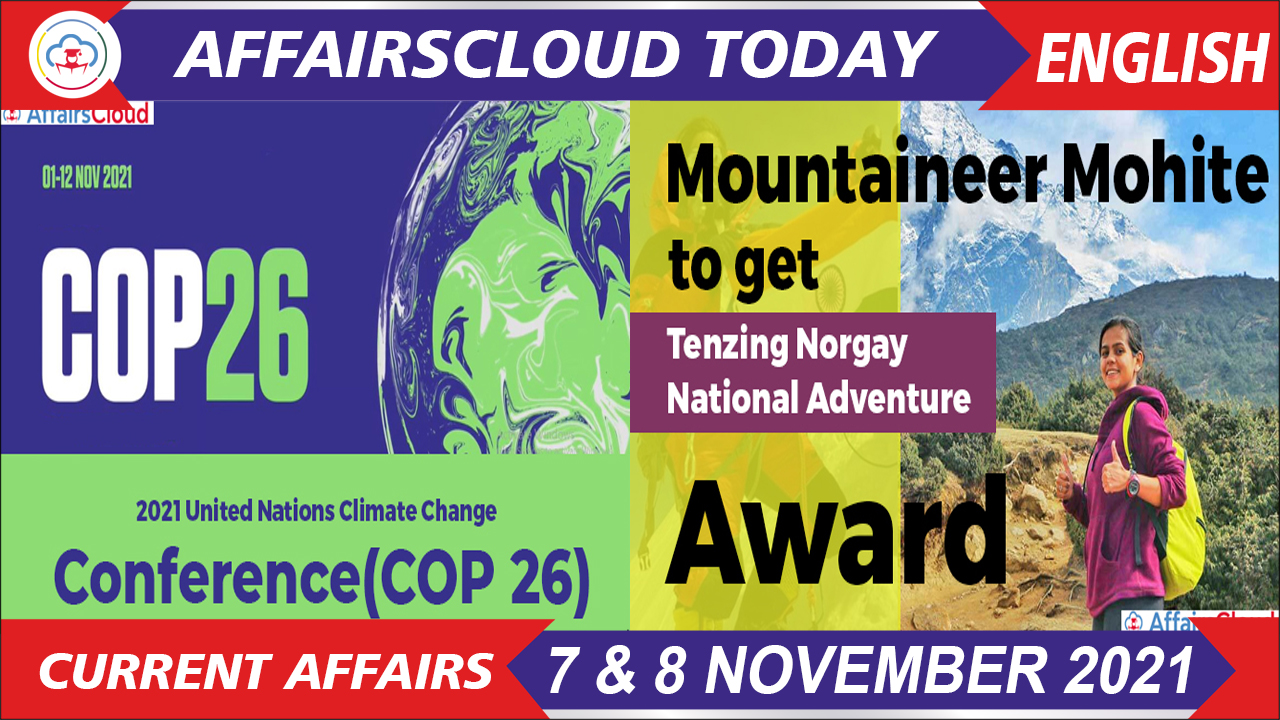 We are here for you to provide the important Recent and Latest Current Affairs 7 & 8 November 2021, which have unique updates of Latest Current Affairs 2021 events from all newspapers such as The Hindu, The Economic Times, PIB, Times of India, PTI, Indian Express, Business Standard and all Government official websites. The Ministry of Finance approved an 8.5% interest rate on Provident Fund (PF) deposits for 2020-21 (FY21). Now, the Employees’ Provident Fund Organisation (EPFO) will credit this interest in accounts of active 60 million beneficiaries.
Key Points:
i.With this move, EPFO will have a surplus of Rs 300 crore as compared to the preceding financial year when it had a surplus of Rs 1000 crore.
ii.The Central Board of Trustees (CBT) of EPFO, headed by the Union Minister Bhupender Yadav, Ministry of Labour and Employment.
iii.Every year EPFO invests 15% of its annual accruals in equity and rest in debt instruments. 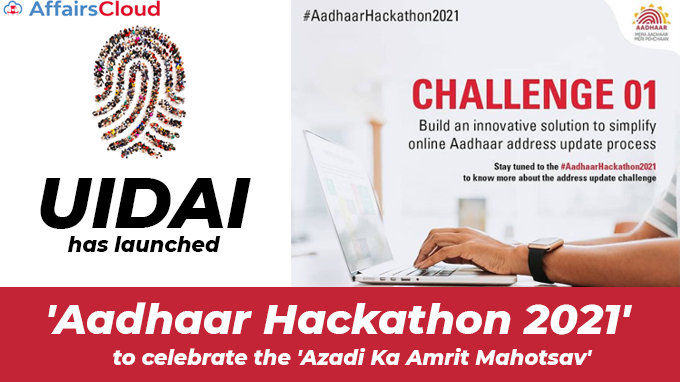 Unique Identification Authority of India (UIDAI), under the Ministry of Electronics and Information Technology (MeitY), has organised a Hackathon ‘Aadhaar Hackathon 2021’ to celebrate “Azadi Ka Amrit Mahotsav” and promote the culture of innovation among youth.

ii.The winning teams will get a chance to work with the Aadhaar team to create the next generation identity and authentication platform under Aadhaar 2.0 initiative.
iii.The team members will also get an invitation to participate in the 1st ever global conference on Aadhaar 2.0.
Key Points:
i.The innovators worked on the solution for the real-life challenges under consideration by the UIDAI and created novel ideas and solutions for the next decade of Aadhaar.
ii.UIDAI has also arranged an online mentoring session to explain the problem statements and Aadhaar technologies to the teams under the guidance of Anup Kumar, Deputy Director General (DDG), UIDAI, Dr Vivek Raghavan, Chief Product Manager, UIDAI, Gp Capt B P Sabut, Assistant Director General(ADG), UIDAI and other members from the technology team.
Click here to know more about Aadhaar Hackathon 2021
About Unique Identification Authority of India(UIDAI):
UIDAI is a statutory authority established under the provisions of the Aadhaar act 2016 by the Government of India under the MeitY.
CEO– Saurabh Garg
Headquarters– New Delhi The 26th Conference of Parties (COP26) of the United Nations Framework Convention on Climate Change (UNFCCC) is being held in Glasgow, Scotland, United Kingdom (UK) from 31st October – 12 November 2021.

-India’s 5 Commitments set at COP 26
i.At the summit, the PM has set 5 ambitious targets for India to combat climate change. It includes that India will aim to attain net-zero emissions by 2070.
ii.The PM asserted that India is the only country that is delivering on the commitments on tackling climate change under the Paris Agreement.

iii.In order to support vulnerable island nations that are in danger of submerging because of rising sea levels, the PM urged the rich countries to provide $ 1 trillion in climate finance to the developing world to achieve its climate change mitigation targets.

iv.India’s launch at COP26: At the COP26, PM launched a programme IRIS (Infrastructure for the Resilient Island States), a key India-led initiative to boost infrastructure in small island nations.
v.World’s 1st Green Grids Initiative Launched by Indian and UK
PM Modi and his British counterpart Boris Johnson jointly launched the world’s 1st ‘green Grids’ Initiative, the One Sun One World One Grid (GGI-OSOWOG) on the sidelines of the COP26 summit.
vi.Countries pledge to cut methane, deforestation
i.A Global methane pledge was launched to make a 30 percent reduction in global methane emissions from 2020 levels by 2030. The pledge is jointly led by the United States and the European Union. So far, over 90 countries have signed the pledge.
ii.The pledge to stop and reverse deforestation by 2030 (not a formal agreement) was also made in the same manner. Over 100 countries including the U.S., China and Brazil have signed on to it.
About United Kingdom(UK):
Capital – London
Currency – Pound sterling
Prime minister – Boris Johnson
>>Read Full News 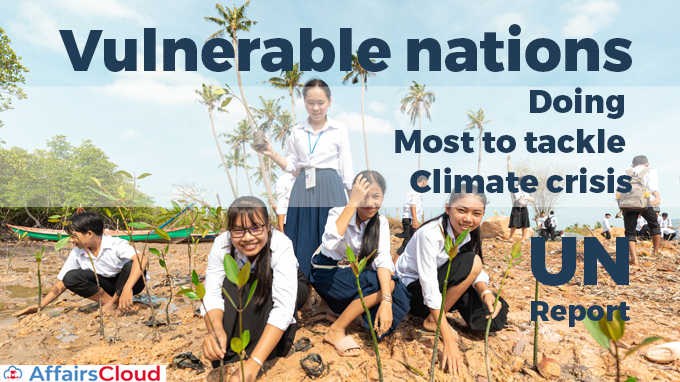 In accordance with the report titled ‘The State of Climate Ambition’ 2021 released by the United Nations Development Programme (UNDP), vulnerable nations are doing most to tackle the climate crisis while the biggest emitters or richer countries are showing slow response towards climate crisis.

Key Points:
i.Notably 93% of the Least developed countries (LDCs) and Small Island Developing States (SIDS) had submitted enhanced national climate pledges, or plan to do so. This group of LDCs and SIDS comprising 78 countries is only responsible for 7% of global GHG emissions.

ii.The pledges were needed to be included in the ongoing United Nations Framework Convention on Climate Change (UNFCCC) in Glasgow, Scotland for analysis.
iii.Also, the 18 NDCs (Nationally determined contributions) submitted by G20 members, many are reliant on long-term targets lacking near-term ambition of reducing GHG (Greenhouse Gas) emissions.
iv.The report featured the promising initiatives from ten countries that have been supported under the Climate Promise including Chile, Iraq, North Macedonia, Papua New Guinea, Zimbabwe, Somalia, etc.
About report:
It provides global assessment of both the pledges already submitted to the UNFCCC as well as ambition intentions of countries that are still planning to submit.  It also compares current trends against those that were assessed in the first NDC Global Outlook report in 2019.

On 29th October 2021, The United Nations Security Council(UNSC) adopted the first of its kind resolution(resolution 2601) on protecting schools and civilians connected with schools including children and teachers during armed conflict. Maharashtra-based, 28-year old mountaineer Priyanka Mohite was selected by the Ministry of Youth Affairs and Sports for the prestigious ‘Tenzing Norgay National Adventure Award 2020’ for outstanding contribution in the field of land adventure.
Achievements
i.She scaled the world’s highest peak Mt Everest, Mt Lhotse and Mt.Makalu
ii.She is the 1st Indian woman to climb Mt Annapurna, the 10th highest mountain peak in the world.
Note – In 2018, Shivangi Pathak, 16-year old, became the youngest Indian woman to reach the summit of Mount Everest.
Tenzing Norgay National Award 2020
Priyanka is one among the 7-recipients of ‘2020 Tenzing Norgay National Award’ & will receive the award from President Ram Nath Kovind in during the 2021 National Sports Award.

ii.It is the highest National award in the field of adventure on land, sea and air, which is equivalent to the Arjuna Award. 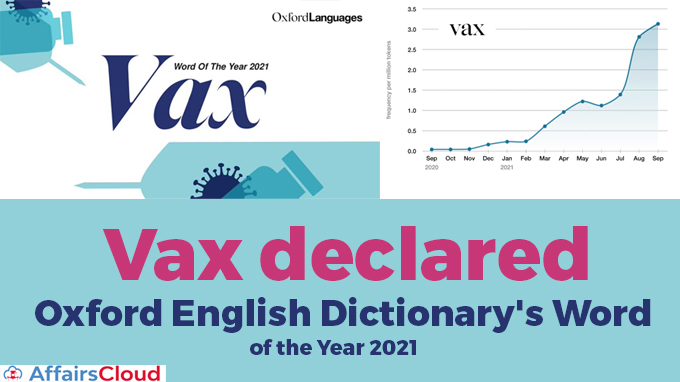 ‘Vax’ has been chosen as the Word of the Year for 2021 by the Oxford English Dictionary (OED). In 2021, Vax which inturn refers to ‘Vaccine’ or ‘Vaccination’ repeatedly appeared in the news, and other written media more than any other word.

The National Company Law Tribunal (NCLT) has approved the acquisition of the 26% stake of bankrupt Infrastructure Leasing and Financial Services(ILFS) in ONGC Tripura Power Company (OTPC) by GAIL (India) Ltd.

Australia to send Rover on Moon in 2024 to search Water Private companies in Australia and Canada in collaboration with University of Technology Sydney are all set to send a rover on the moon to hunt water by mid-2024. This will be the first rover with Australian-made components to make it to the Moon.

Key Points:
i.The rover will have an integrated robotic arm created by the private companies Stardust Technologies (based in Canada) and Australia’s EXPLOR Space Technology.
ii.The arm will collect high-resolution visual and haptic data using cameras and sensors which will be sent back to the mission control centre at the University of Technology Sydney.
iii.It will also collect information on the physical and chemical composition of lunar dust, soil and rocks.
Static:
i.Moon experiences day and night cycles, just like Earth, but one day on the Moon lasts 29.5 Earth days.
ii.The surface temperatures of the moon reaches up to 127 degree Celsius during the day and falls as low as -173 degree Celsius at night. On 6th November 2021, China successfully placed 3-remote sensing satellites into orbit using the Long March-2D rocket. The satellites belonging to the Yaogan-35 family were launched from the Xichang Satellite Launch Centre in Sichuan province of China.

i.Long March rockets, developed by the China Aerospace Science and Technology Corporation, are responsible for almost 96.4% of all Chinese space missions.
ii.Previously in 2019, China made the 300th successful mission using Long March rockets, since its inception in the 1970s.
iii. Frequency of Chinese Rocket Launch:

And in less than 2 years it is set to complete the next 100 launches.
Note – China previously launched the Core module of ‘Tiangong Space Station’ into Space. At present, Tiangong is the alternative to the International Space Station (ISS), which is set to retire in 2024.
About China:
Capital – Beijing
President – Xi Jinping
Currency – Renminbi 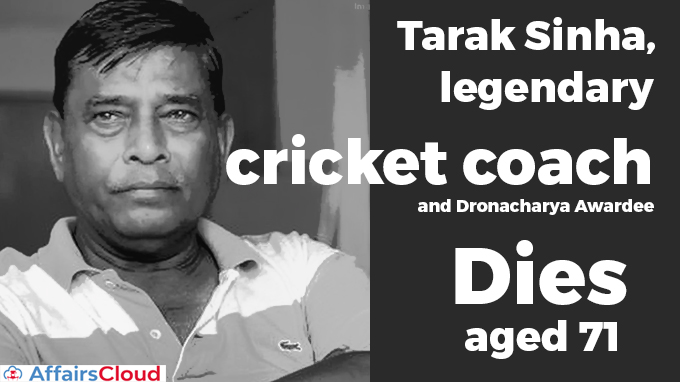 Renowned Cricket Coach and Dronacharya Awardee Tarak Sinha passed away due to cancer at the age of 71 in New Delhi. He was fondly referred to as “Ustad ji” by his disciples.
About Tarak Sinha:
i.Tarak Sinha was the founder of the Sonnet Cricket Club, Delhi.
ii.He has served as the coach of the Delhi team which won the Ranji title in the 1985-86 season.
iii.He has also served as the head coach of the National Women’s cricket team.
iv.The International cricketers who were trained by Tarak Sinha include Surinder Khanna, Aakash Chopra, Shikhar Dhawan, Anjum Chopra and Rishabh Pant.
Honours:
i.He received the Dronacharya Award (LifeTime) for Cricket in 2018.
ii.He was the 5th Indian cricket coach to win the honour, after Desh Prem Azad, Gurcharan Singh, Ramakant Achrekar and Sunita Sharma. Prime Minister (PM) Narendra Modi virtually interacted with the beneficiaries and stakeholders of  Atma Nirbhar Bharat ‘Swayampurna Goa’ programme. He made an address ensuring that various government schemes and benefits are available by the eligible beneficiaries.

Objective – To ensure that every village in the state becomes self-reliant (Atma Nirbhar) using resources within the area.
About Swayampurna Goa:
i.’Swayampurna Mitra’, a dedicated officer appointed to oversee the programme implementation in every panchayat or municipality.
ii.Under the programme government officers, teachers and students reach out to each village panchayat to adopt various sustainable methods to gain economic empowerment.
iii.A study of the economic revival for village panchayats was undertaken by the Directorate of Higher Education and GIPARD, where 25 colleges were involved in the process of data collection, preparation of individual reports of 191 village panchayats.
About Goa:
Capital – Panaji
Chief Minister – Pramod Sawant
Governor – P.S. Sreedharan Pillai