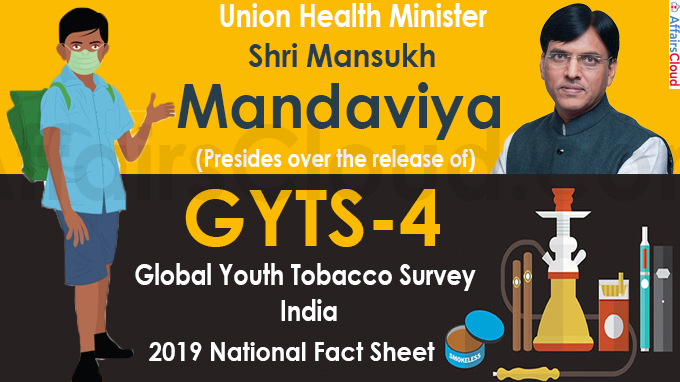 Current use of Tobacco:

i.GYTS survey was formed by India from 2003 (3 years once) after the enactment of Cigarettes and Other Tobacco Products Act (COTPA) 2003 and ratification of the WHO Framework Convention on Tobacco Control (FCTC) to mitigate the problems caused by tobacco.

ii.The GYTS-4 was conducted in 2019 by the International Institute for Population Sciences (IIPS) under the Ministry of Health and Family Welfare (MoHFW).

iii.It provides national estimates of tobacco use among school going children aged 13-15 years (studying in grades 8 to10) at the state level and Union Territory (UT) by sex, location of school (rural-urban), and management of school (public-private).

ii.The prevalence of smoking and smokeless tobacco were about 7.3 percent and 4.1 percent.

iii.The use of e-cigarette among the students was being at 2.8 percent

iv.Nearly 1/5th of the students aged 13-15 years used any form of the tobacco product (smoking, smokeless, and any other form) in their life.

v.Declined Current usage: The current usage of tobacco (during last 30 days) was 8.5 percent. It was declined by 42 percent from the last two surveys.

b.Cessation: 27 percent of current users of smokeless tobacco tried to quit using it.

The World Health Organisation (WHO) has awarded Union Health Minister Harsh Vardhan with ‘WHO Director-General Special Award’ for his accomplishments in the area of tobacco control.