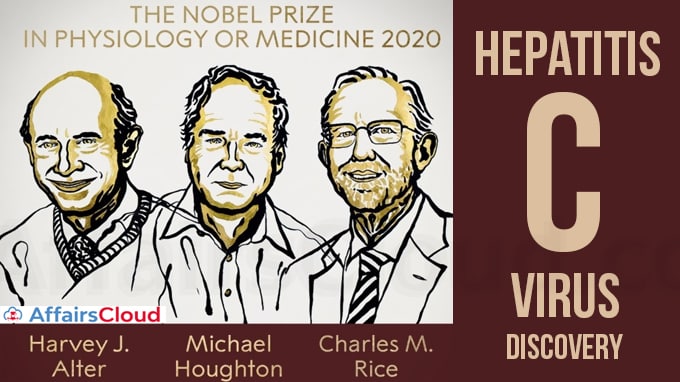 On October 5, 2020 The Head of the Nobel Committee, Thomas Perlmann announced  the Nobel Prize in Physiology or Medicine 2020 jointly to 2 Americans Harvey J. Alter and Charles M. Rice and one British-born scientist Michael Houghton for discovering the Hepatitis C virus, a major global health problem that causes cirrhosis and liver cancer at the Nobel Assembly at Karolinska Institutet in Stockholm, Sweden.

Note- The award is the 1st of six prizes being announced. The other prizes include in the fields of physics, chemistry, literature, peace and economics.

Their discovery  has revealed the cause of  the remaining cases of chronic hepatitis and has also paved the way for rapid development of antiviral drugs directed at hepatitis C.

The disease for the 1st time in history can be cured.

The World Health Organization (WHO) estimates that there are over 70 million cases of hepatitis, the chronic disease around the world and is responsible for 4 lakh deaths annually.

About Discovery of  Hepatitis C virus

i.The methodical studies of Harvey J. Alter’s transfusion-associated hepatitis exhibited that an unknown virus was a common cause of chronic hepatitis.

ii.An untested strategy was used by Michael Houghton to  isolate the genome of the new virus that was named the Hepatitis C virus.

i.Harvey J. Alter– He is currently working in National Institutes of Health (NIH) as a chief of the infectious diseases section and associate director of research in the department of transfusion medicine.

ii.Michael Houghton–  He is currently a Canada Excellence Research Chair in Virology and the Li Ka Shing Professor of Virology at the University of Alberta. He is also Director of the Li Ka Shing Applied Virology Institute.

iii.Charles M. Rice– He is currently working in Center for the Study of Hepatitis C at Rockefeller University.

i.The Nobel Assembly at Karolinska Institutet is responsible for selecting the Nobel Laureates in Physiology or Medicine. It is selecting since 1901 as per the terms of Alfred Nobel’s will.

ii.The Nobel Assembly has 50 voting members and comprises professors in medical subjects at the  Institutet.

iii.The Nobel Committee is the working body of the Nobel Assembly. The committee is elected from among its members for a three-year term.

i.Marie Skłodowska Curie is the only person who won 2 Nobel Prizes in two different scientific categories, namely 1903 Nobel Prize in Physics and the 1911 Nobel Prize in Chemistry.

ii.Gerty Cori(1947) is the 1st women to receive Nobel Prize in the field of Physiology or Medicine.

i.On 26th August, 2020 Dutch Author Marieke Lucas Rijneveld won the 2020 International Booker Prize for the Literary fiction book ‘The Discomfort of Evening’. Rijneveld became the youngest author to win the prize at the age of 29.