Do visit Descriptive Writing part 1 before reading this article

Note – For the sake of the article I have chosen the topic – ‘GST:  A must for India’

Beginning from where we left the first part, let’s begin structuring the essay.

PARTS OF AN ESSAY

Every essay consists of these three parts

There are many ways to start an essay. Following are the most common ones:

‘General Statement’ is the best way to start an essay. More than half the candidates follow this approach. It should entail simple language, (be as simple as you can) describing the main topic.

After a one line intro, you should move to from general to specific.

GST is a type of an indirect tax which India is in process of implementing form 1st July 2017. Govt. wants to make India a single market and remove tax barriers between states.

You can write two to three lines and then move towards your theme or premise. This theme must coincide with the topic given. In the theme, you should give your own point of view.

For example –  GST would be a big step forward for a country like India to move towards a robust economic growth in coming years.(I have stated the topic in my own words, with some different direction).

Build your essay around this theme now. Intro part is done, now you have to connect this statement to the next paragraph. (Caution – do not use pronoun IT for GST in this line. Remember the ‘HaanikarakBapu’ GST must be repeated again and again)

What we have learnt : INTRO

First thing you need to do is connect this portion with the theme that you have chosen, i.e. connect it with the last line – robust economic growth. This is a very very important point. If you don’t do it, then reader might get confused and we don’t want to confuse the EXAMINER. Hence take care of it.

Explain your theme and support it with statements. Give supporting ideas, prove your point through examples or numbers. This is the portion where you will use all your knowledge. Write all the technical data about GST, but only the relevant ones.

(Now don’t put question ‘Sir relevant details kaunkaun sepoints honge???’ if you know about the topic, you must be able to differentiate between relevant and irrelevant ones).

If you feel dearth of data or are unable to recall anything, use PESTLE 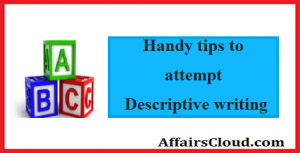 Try to incorporate as my points as possible. In a topic like – Women Empowerment – Political : 33% reservation in seats, reservation of some wards for females MC elections ; E – if women are not empowered, half of the population is not contributing to the development of nation; S- women is educated, family is educated etc etc. Technological, and Environmental cannot be incorporated in this topic. But in case of topic say, Indian Meteorological Department- Technology will be main focus. So, it depends from topic to topic which points are relevant.

This will be the biggest portion of the essay, so make sure all the sentences are well connected. Use connectors – however, moreover, another reason etc.

India will have to leverage the moral and diplomatic advantage it has obtained through this ruling to help Mr. Jadhav prove his innocence before a civilian court and win his freedom. Pakistan must act responsibly and abide by the fundamental norms of international law.

This has been taken from an editorial of ‘The Hindu’. Read how the writer has ended it optimistically. India should do………………… Pakistan should ……………. Although reality is very different.

Govt should increase the budget allotted to cleanliness and the citizens also must take responsibility that they do not litter here and there.

All optimism can be seen in these lines. Although none of the two things can happen.

Intro and Conclusion are the two more important parts. I have provided you complete detail about writing the descriptive. If you follow these points, score of more than 20 out of 30 is guaranteed. But getting a command over these points would only come by practicing more and more. Remember- An essay a day keeps the ‘Descriptive Fear’ away.

I will put a topic on daily basis, you may write on that topic and submit it to me. I would also suggest you to make a group among your friends (probably a watsapp group), so that everyone in the group can put in their suggestions after reviewing the essay.

(Replies only to the above said group will be entertained)

English Questions – ODD ONE OUT Sentences 5