The first of its kind retreat of bankers and insurers held in Pune in 2015 on January 2-3. The major theme at the two-day ‘Gyan Sangam’ on January 2-3 was the mergers and acquisitions of PSU banks. Among other were discussions on non-performing assets, carrying out changes to recovery laws and giving out employee stock options. 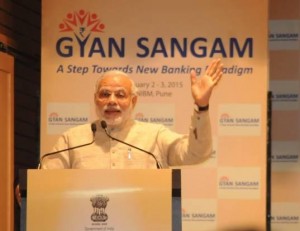 In a presentation made to the Prime Minister, SBI Chairperson Arundhati Bhattacharya included five major resolutions on the behalf of all bankers. The five points include: a decision to re-orient the portfolios of small public sector banks to focus on specific and differentiated niches, build people capacities, use of more technology (especially in the top 30 processes), strengthen risk management practises and strengthen the partner channels such as business correspondents.

Third phase of Gyan sangam to focus on consolidation of banks