On November 8, 2019, The Gujarat Control of Terrorism and Organised Crime Bill (GCTOC), designed to crack down on terrorism and organized crime, has now become law after getting approval from President Ram Nath Kovind. 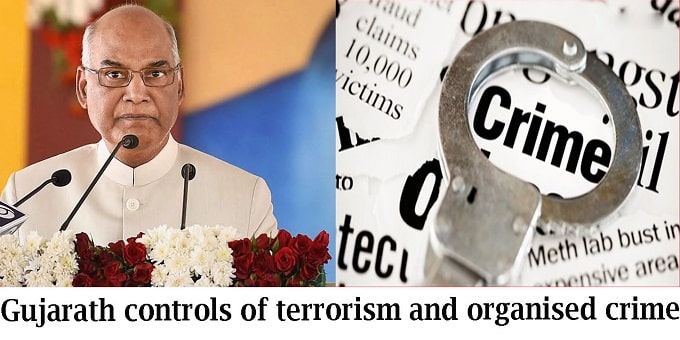 ii.Two key features of the act:The special feature of this law is intercepted telephone conversations could be considered as statutory evidence and a confession made before a police officer would also be considered documented evidence. President Kovind has nod for both features.

iii.Background: The Gujarat Control Organized of Crime Bill (GUJCOC) was first introduced in the Gujarat Assembly in 2003 by then Chief Minister Narendra Modi. The president and governors returned this law several times for amendments.
In 2015, the Gujarat government re-presented the bill by renaming it as the GCTOC but retained the controversial provisions to empower the police to tap telephonic conversations and submit them to the court as evidence.

iv. Other state laws: Maharashtra Control of Organised Crime Act (MCOCA) was the first that get President approval. Enacted in 1999, it was extended to the National Capital Territory in 2002 by the Home Ministry. After that, Karnataka’s Bill, passed in the year 2000 & in 2006, the Chhattisgarh Vishesh Jan Suraksha Adhiniyam (Special Public Security Act), 2005 received the President’s nod.