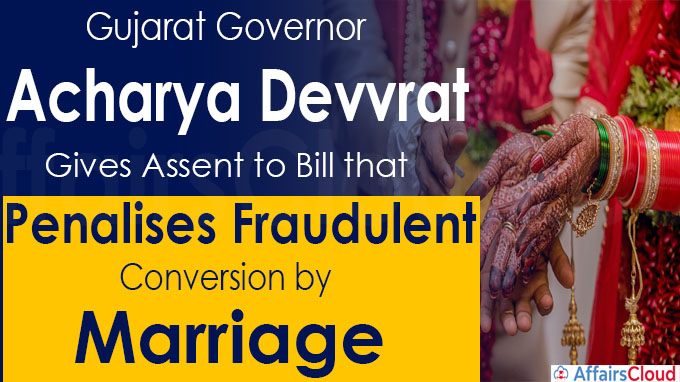 Gujarat Governor Acharya Devvrat gave his assent to the ‘Gujarat Freedom of Religion (Amendment) Bill, 2021’, which provides imprisonment of up to 10 years for fraudulent/forcible conversion by marriage.

i.The amended bill proposes that, a forcible ‘conversion by marriage, or by getting a person married, or by aiding a person to get married’ shall invite imprisonment of 3-5 years and fine of up to INR 2 Lakh.

The other bills which received Governor’s assent were – The Gujarat Prohibition of Transfer of Immovable Property and Provision for Protection of Tenants from Eviction from Premises in the Disturbed Areas (Amendment) Bill 2021, Gujarat Private Universities (Amendment) Bill, 2021 and others.