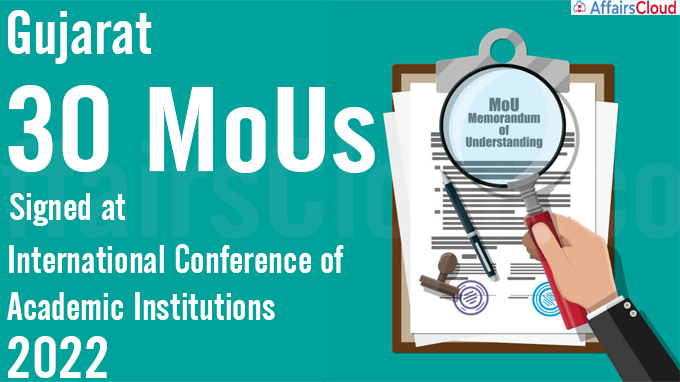 Launching SSIP 2.0, Gujarat becomes the 1st of its kind state for launching student support initiatives and support them financially.

i.SSIP 2.0 intends to establish an innovation and incubation centre in each of the 90-odd universities in Gujarat.

ii.It aims to provide financial assistance to school and college students up to the age of 35 years to build prototypes and also financial assistance for filing at least 1,000 Intellectual Properties (IPs) and building a pre-incubation support system in 500 institutions and universities.

Over 30 Memorandum of Understanding (MoUs) has been signed in the higher and technical education sector in Gujarat during the ICAI-2022. The MoUs were signed ahead of the Vibrant Gujarat Global Summit 2022, which was scheduled to be held between January 10 and 12, 2022.

i.Australia, Canada, Norway, the UK and France have joined as partner countries for this conference, while the British Council, Australia India Business Exchange and Institute of International Education are among the key institutions which have joined as international participants.

ii.During the conference, the discussion will be held on subjects such as the internationalisation of education, skill development and employability, digital empowerment, the global ranking of universities and inclusive education for children with special needs, etc.

iii.Over 2,000 MoUs were expected to be signed between various government entities, universities and institutions during the conference and a vice chancellors’ conclave for building ‘world-class universities’ was also held at the event.

Note – Gujarat has nearly 91 universities and over 2,800 education institutions. ICAI 2022 endeavours to provide a platform to academicians, researchers, and students around the globe to deliberate on diverse perspectives of the NEP (National Education Policy) – 2020

On December 25 2021, on the occasion of Good Governance day, Union Minister of Home Affairs and Minister of Cooperation, Amit Shah released the Good Governance Index 2020-21 (GGI 2021) which was a biannual exercise prepared by the Department of Administrative Reforms and Public Grievances (DARPG).

Gujarat has topped the composite ranking in the GGI covering 10 sectors 58 indicator index followed by Maharashtra and Goa.