A new Guinness World Record for the largest Lego sculpture has been set in the UK, where a 13-metre high replica of the London’s iconic Tower Bridge was created using an astounding 5,805,846 individual pieces. This huge 13-metre high LEGO version of London’s Tower Bridge created for Land Rover to launch their New Discovery car has set a new world record. 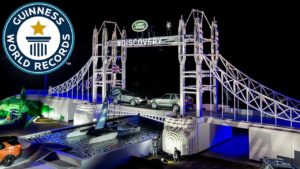 Lego is a line of plastic construction toys that are manufactured by The Lego Group, a privately held company based in Billund, Denmark.

About the World record,

The bricks used in the construction would stretch for almost 200 miles – the equivalent distance from Tower Bridge in London to Paris.