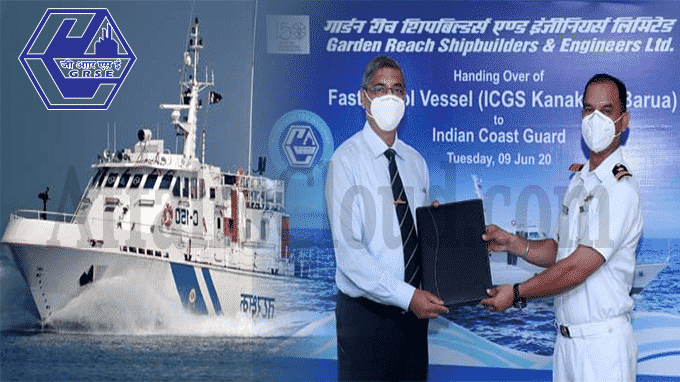 The 5th and last ship in the series of Fast Patrol Vessels (FPV) namely “ICGS Kanaklata Barua” or “Yard 2117” for the Indian Coast Guard (ICG) has been delivered by Garden Reach Shipbuilders and Engineers (GRSE) Ltd. This was the 105th vessel delivered by GRSE.

Yard 2116, the Fourth ship in the series of FPVs is designated for export delivery to the Seychelles Coast Guard (SCG). In order to fill the gap, GRSE will make another ship as a replacement to the exported one after inking related formalities regarding amendments to the existing contract.

These are entirely designed by GRSE’s Central Design Office which can achieve speeds exceeding 34 knots with an endurance of more than 1500 nautical miles.

It was nationalized in the year 1960 and was awarded the status of Schedule B & Mini Ratna-Category I Company by the Department of Public Enterprises under the Ministry of Heavy Industries and Public Enterprises.
Headquarters– Kolkata, India.
Chairman and Managing Director (CMD)– Rear Admiral Vipin Kumar Saxena, IN(retd).

Piyush Goyal & Dr. Than Myint Co-Chaired the 7th Meeting of the Joint Trade...