On July 22, 2019, An Inter-Ministerial committee set up by the Government on virtual currency headed by finance secretary Subhash Chandra Garg submitted its report to the Finance Ministry. 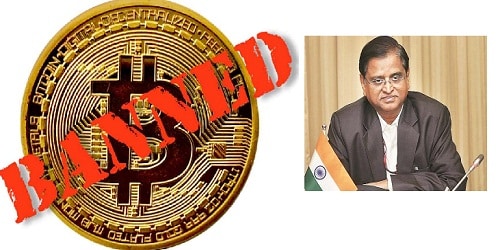 Key Highlights:
i. It recommended that private cryptocurrencies be banned completely in India except for the one’s issue by the state.
ii. It also drafted law, the ‘Banning of Cryptocurrency & Regulation of Official Digital Currency Bill, 2019’ & recommended a fine of up to 250 million rupees ($3.63 million) and imprisonment for up to 10 years for anyone who mines, generates, holds, sells, transfers or issues cryptocurrency.
iii. It stated that  Private digital currencies have no underlying intrinsic value and lacked the attributes of currency & there are around 2,116 cryptocurrencies, Bitcoin like Rippld, Ethereum, and Cardano with a market capitalization of $119.46 billion.
iv. The panel was set up under SC Garg in 2017 after reports of extensive money laundering with the use of digital currencies.
v. The panel stated that distributed ledger technology (DLT), the most common use in which blockchain was good in financial and non-financial areas but cryptocurrencies which were a contradiction and would not work.
vi. The other members in the panel include Ajay Prakash Sawhney, Secretary, Ministry of Electronics and Information Technology; Ajay Tyagi, chairman, Securities, and Exchange Board of India (SEBI), and B P Kanungo, deputy governor, Reserve Bank of India (RBI).

About Cryptocurrency:
It is a digital asset designed to work as a medium of exchange that uses strong cryptography to secure financial transactions, control the creation of additional units, and verify the transfer of assets.