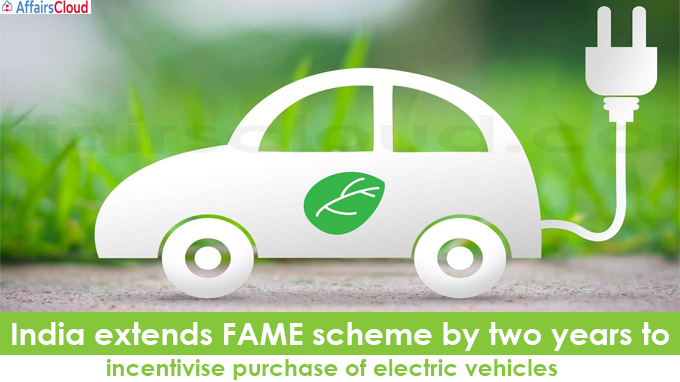 ii.Funds utilisation: As only 5 percent/Rs 492 crore is spent out of the Rs 10,000 crore till March 2021, the scheme is extended to utilise the allocated funds.

Note – No changes were made in the financial allocation of the scheme.

i.Earlier in June 2021, the MoHI&PE made partial modifications over Phase II of the FAME India scheme for aggregation of electric 3-wheelers and buses via state-run Energy Efficiency Services Ltd (EESL). Click here to know more

iii.The cap on maximum available subsidy on the total price of the vehicle was also increased by the govt to 40 percent from the earlier cap of 20 percent.

iv.The Gujarat govt’s EV policy, coupled with FAME-II, announced a 25 percent capital subsidy of up to Rs 10 lakh per station on equipment for the first 250 commercial public EV charging stations.

‘Global EV Outlook 2021’ – the recently released Annual Report of the International Energy Agency (IEA) has stated that the sale of Electric Vehicles (EVs) will be more than 30% of new vehicle sales in India by 2030.

About Ministry of heavy industries and public enterprises(MoHI&PE):