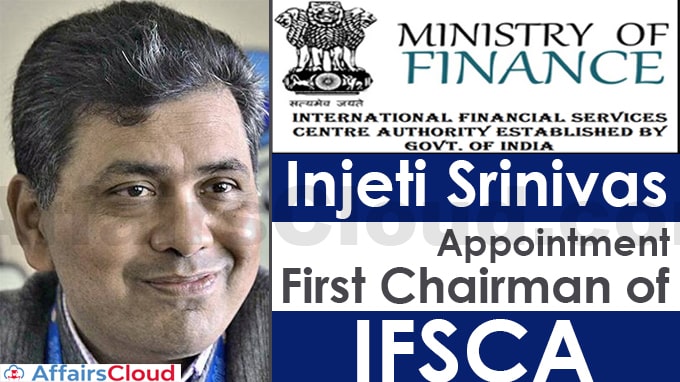 Other Members of IFSCA

i.Injeti Srinivas is a 1983 batch IAS officer from the Odisha cadre

ii.He retired as corporate affairs secretary on May 31 on his superannuation.

iii.He also has served as the secretary of the department of sports and as the  director general of Sports Authority of India (SAI)

i.The Union government had notified that it had  set up the IFSCA on April 27, 2020. It will act as a unified authority to regulate all financial services in IFSCs across the country.

ii.The notification has  brought into effect certain provisions of the IFSCA Act, 2019, in relation to its functioning. The Central government has been refrained from enabling  full authority over all the powers as envisaged in the Act.

Main Function– To regulate financial products such as securities, deposits or contracts of insurance, financial services, and financial institutions that were previously approved by any appropriate regulator in an IFSC.

Note: According to the Act, the regulators include SEBI, RBI, Irdai  and PFRDA.
Headquarters– Gandhinagar, Gujarat