Government has met the fiscal deficit target of 3.4% for the Financial Year 2018-19. The fiscal deficit stood at 3.39% against the estimated rate of 3.4%. The data was released by the Controller General of Accounts (CGA). It was met through reduction in government spending, which also contributed to GDP growth slowing to 5.8% in fourth quarter of FY19. 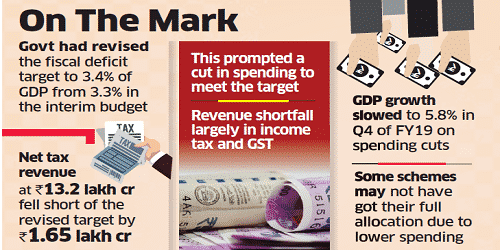 The information regarding accounts of the union government is released by the Controller General of Accounts (CGA). Its statutory mandate (duties and functions) have been defined in the Allocation of Business Rules, 1961. It works under the Ministry of Finance, Government of India.