On October 24, 2017, Union Government announced to infuse Rs. 2.11 lakh crore capital over the next two years into public sector banks (PSBs). This announcement was made by Finance Minister Arun Jaitley post a cabinet meeting in which this recapitalisation plan was approved. 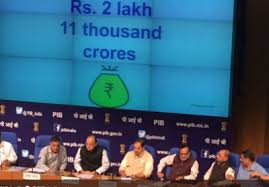 18000 crore out of Rs. 2.11 lakh crore will be funded through Government’s Indradhanush Plan. In 2015 Government had announced Indradhnush Plan to infuse Rs 70,000 crore in public sector banks over four years to meet their capital requirement as per Basel –III norms.