According to data released by the Ministry for Petroleum & Natural Gas on December 29, 2016, Government has achieved its target of providing 1.5 crore free LPG connections under the Pradhan Mantri Ujjwala Yojana (PMUY) to the BPL households in less than 8 months.

The Government had made a provision of Rs 2,000 crore in the Budget for providing LPG connection free of cost to Rs. 1.5 crore poor BPL households in 2016-17. However, the Ministry of Petroleum & Natural Gas informed that the effort to provide clean energy was met within 8 months. 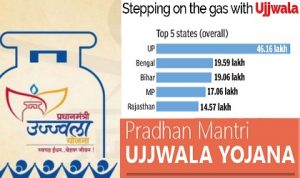 The Pradhan Mantri Ujjwala Yojana is a welfare program of the government of India, launched by Indian Prime Minister Narendra Modi on May 1, 2016 from Balia, Uttar Pradesh

India is home to more than 24 crore households, of which about 10 crore still do not have access to LPG for cooking and have to rely on firewood, coal, dung cakes as primary fuel for cooking. This leads to many health problem including respiratory issue.