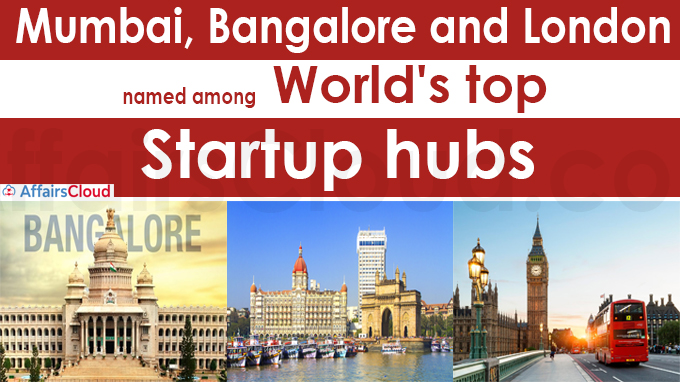 As per the annual ranking of the international startup hubs named ‘Global Startup Ecosystem Report 2021’, compiled by research organisation ‘Startup Genome’ and The Global Entrepreneurship Network, London, Mumbai, and Bangalore are featured among the world’s top startup hubs.

iii.Bangalore and the surrounding state of Karnataka are also mentioned as the world’s 4th largest technology and innovation cluster.

iv.Other Indian hubs such as Chennai, Pune and Hyderabad were also made it into the ‘Top 100 Emerging Ecosystems’ list.

v.North America accounts for 50 percent of the top 30 ecosystems in 2021, followed by Asia with 27 percent and Europe with 17 percent.

vi.London was stated as the most attractive destination to set up a tech startup outside of Silicon Valley, with an overall ecosystem value of USD 142.7 billion.

vii.The report ranked the leading 140 startup ecosystems based on 7 success factors including Performance, Talent and Connectedness.