On April 27, 2020, According to a new report by the Stockholm International Peace Research Institute (SIPRI), the total global military expenditure rose to USD 1,917 billion in 2019, which represents an annual growth of 3.6% compared to 2018 & it is the largest annual growth in spending since 2010. For the 1st time two Asian countries- China(2nd), India(3rd) have featured among the top military spenders after the United States- US(1st). 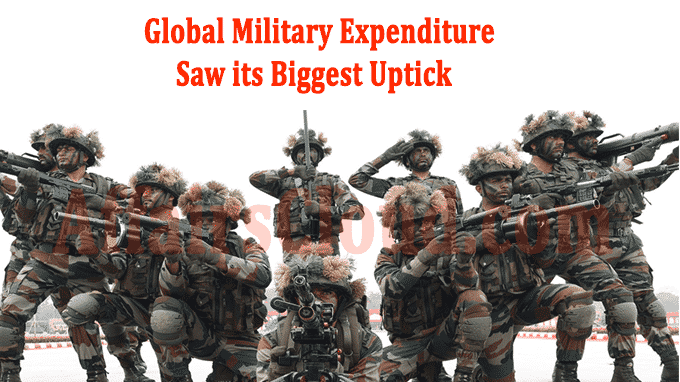 Gist on military expenditure as per the report

i.The US grew by 5.3% to a total of USD 732 billion in 2019 and accounted for 38% of global military spending. The increase in 2019 is equivalent to the entire of Germany’s military expenditure for that year & the growth is based on a perceived return to competition between the great powers

ii.China reached USD 261 billion in 2019, a 5.1% increase compared to 2018 & India grew by 6.8% to USD 71.1 billion. India’s tensions and rivalry with both Pakistan and China are among the major drivers for its increased military spending.

iv.Japan (USD 47.6 billion) and South Korea (USD 43.9 billion) are the largest military spenders in Asia and Oceania, in addition to India & China. Military expenditure in the region has risen every year since at least 1989.

v.In Europe, Germany rose by 10% in 2019, to USD 49.3 billion, the largest increase in spending among the top 15 military spenders in 2019, where the increase is partly explained by the view of increased threat from Russia shared by many North Atlantic Treaty Organization (NATO) member states. France and the United Kingdom remained relatively stable.

vi.South America was relatively unchanged in 2019, at USD 52.8 billion. Brazil accounted for 51% of total military expenditure in the sub-region.

vii.The combined military expenditure of states in Africa grew by 1.5% to an estimated USD 41.2 billion in 2019, the region’s 1st spending increase for five years. In South-East Asia it increased by 4.2% in 2019 to reach USD 40.5 billion.

viii.The average military spending burden was-  1.4% of GDP for countries in the Americas, 1.6%  for Africa, 1.7% for Asia and Oceania and for Europe and 4.5% for the Middle East.

About SIPRI:
It is an independent international institute dedicated to research into conflict, armaments, arms control and disarmament & established in 1966. It provides data, analysis and recommendations, based on open sources, to policymakers, researchers, media and the interested public.
Headquarters– Stockholm, Sweden
Chairman– Jan Eliasson