The Ministry of Labour and Employment has declared banking industry as a public utility service (PUS) for six months starting April 21, 2020 till October 21, 2020 under the provisions of the Industrial Disputes Act, 1947. It means the employees and officers of the banking sector are barred to do any strikes in the given period. This decision has been taken due to the adverse impact of COVID-19 on the economic activities. 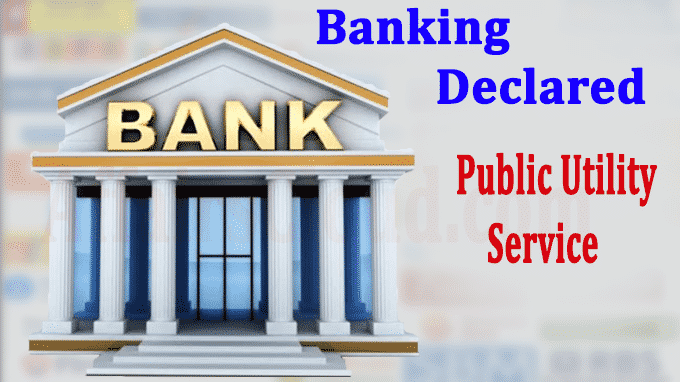 Need to declare banking as PUS
The employees of various Indian banks have very strong unions who used to negotiate their wage agreements with the Indian Banks Association (IBA) every three years. There are also several issues on which the bank unions don’t agree with the decisions of the government. In order to prevent any kind of agitation by the banking sector during the economic crisis imposed by COVID-19 outbreak, the union government has declared the banking industry as PUS.

What is PUS?
A public utility service (PUS) is defined under Section 2(n) of Industrial Disputes Act (ID Act), 1947. In simple terms, it means any service whether public or private that provides everyday necessities to the general public. The Government is authorized to declare any service under the ID ActasPUS for a period of not more than six months by issuing a Notification in the Official Gazette. The period may extend from time to time but not exceeding six months.

What is of Industrial Disputes Act, 1947?
Established on 1 April 1947, ID Act secures industrial peace and harmony by providing mechanism and procedure for the investigation and settlement of industrial disputes. The laws apply only to the organised sector.