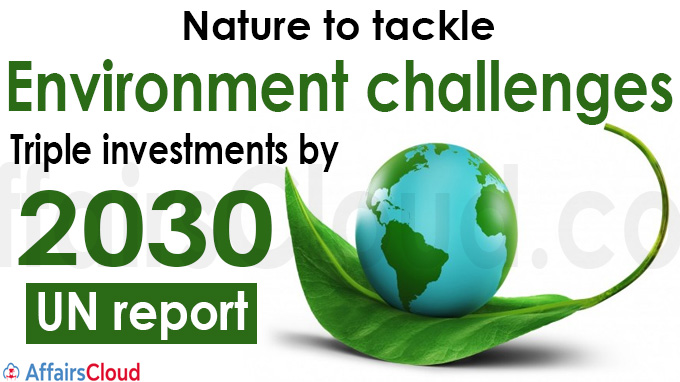 The United Nations report titled, “State of Finance for Nature” estimates the annual investments in Nature-based Solutions (NbS) must be tripled by 2030 and increased to 4-times by 2050, compared to the current spending of USD 133 billion (Rs. 9.7 lakh crores).

i.The “State of Finance for Nature” report was jointly prepared by the United Nations Environment Programme (UNEP), the World Economic Forum (WEF) and the Economics of Land Degradation Initiative.

Public sector spending for the same is dominated by the United States and China, followed by Japan, Germany and Australia. The US tops the list with approximately $36 billion a year in NbS spending, and is closely followed by China with $31 billion.

Future Enhancements: By 2050, total investment of nature needs will amount to $8.1 trillion, while annual investment should reach $536 billion annually by 2050.  Forest-based solutions alone would amount to $203 billion per year.

About Economics of Land Degradation Initiative:

It is a global initiative established in 2011 by the United Nations Convention to Combat Desertification, the German Federal Ministry for Economic Cooperation and Development, and the European Commission.